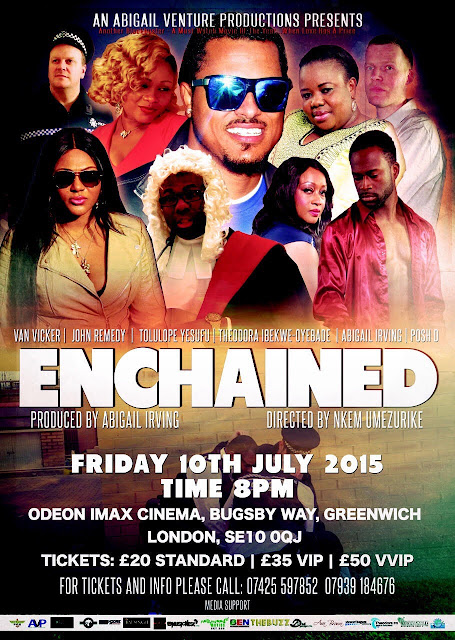 Enchained is a movie shot in the UK about Ryan, a short- sighted young man from Nigeria, who was born to educated respectable parents and grew up within a God fearing family. Unfortunately whilst growing up in his native Nigeria, he fell in with some bad company which influenced his life tremendously.

As Ryan became further entrenched in this world of negative peers, his parents sent him to live with his aunt in the UK, to remove him from the negative influences that were plaguing their son’s life. They also hoped that this would allow Ryan to further his education and lead him to turn his life around and make something of himself and make them proud.

On getting to the UK, Ryan tries his best to stay out of trouble but this did not last long before he falls back into his wayward ways. Eventually his aunt throws him out making him homeless and all the positive and good things in his life start to unravel.

Ryan’s luck changes when he becomes involved in a relationship with a classy professional woman Shanti , they fall in love and she becomes pregnant. Life starts of good for them as they try to build a life and family together. However it is not long before his lies, jealousy, cheating and violence chips away at the foundation of their family. Shanti is hopelessly devoted to him and despite her loved ones telling her to leave him and find someone better, she refuses to listen.

Eventually the pain and heartbreak become too much

for her to cope with and Shanti finds the courage to leave him. Ryan cannot cope with the loss and rejection of her love and his family. He becomes consumed with paranoia, jealousy and hate.

As anger rages within him, he goes in search of Shanti and his actions on this fateful day lead to terrible consequences not just to his life but that of those closest to him.

Love always comes with a price, find out who paid for it in this captivating, educative and mind blowing movie, full of suspense ENCHAINED!