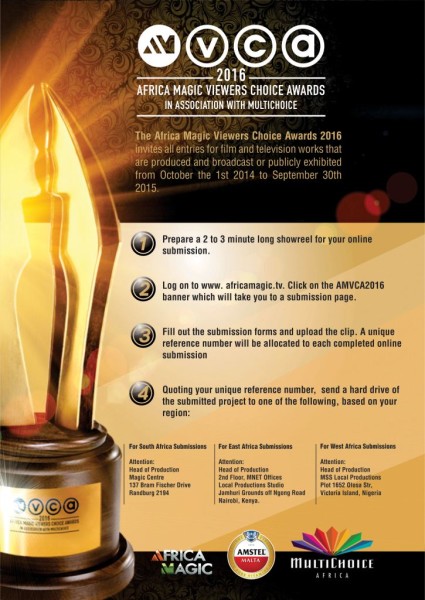 Africa Magic, the continent’s leading provider of entertainment for Africa by Africans, in association with MultiChoice has announced the call to entry for the 2016 edition of the Africa Magic Viewers’ Choice Awards (AMVCAs).

Wangi Mba-Uzoukwu, Regional Director for M-Net (West), said: “We are pleased to announce the call to entry for the 2016 edition of the Africa Magic Viewers’ Choice Awards. At Africa Magic and MultiChoice, we have continued to show our support to the film and television industry across Africa even as we continue to provide world class entertainment for Africa by Africans. For the 4th edition of the AMVCAs, we are inviting all entries for film and television works that are produced and broadcast or publicly exhibited from October 1st 2014 to September 30th 2015“.

The AMVCAs were created to celebrate the contribution of African filmmakers, actors and technicians in the success of the continent’s film and television industry and with the success of the previous three editions, preparations for the 2016 edition are underway.

John Ugbe, Managing Director, MultiChoice Nigeria said: “We are very excited to once again bring the AMVCAs to our viewers across the continent and indeed the world. The 2016 edition will make it four years of celebrating Africa’s finest talent in the film and television industry and we at MultiChoice are glad to be a part of that celebration“.

For this 4th edition of the AMVCAs, the organisers are inviting all entries for film and television works produced and broadcast or publicly exhibited from October the 1st 2014 to September 30th 2015.

Here is the entry guidelines:

Step 1
Prepare a 2 to 3 minute long showreel for your online submission.

Step 2
Log on to www. africamagic.tv. Click on the AMVCA2016 banner which will take you to a submission page.

Step 3
Fill out the submission forms and upload the clip. A unique reference number will be allocated to each completed online submission

Step 4
Quoting your unique reference number, send a hard drive of the submitted project to one of the following, based on your region: