“Coping With The Boko Haram Insurgency” is a two part Documentary filmed in Nigeria in the aftermath of the #BringBackOurGirls Campaign in Chibok, produced by Kayode Ogundamisi and Hona Africa. 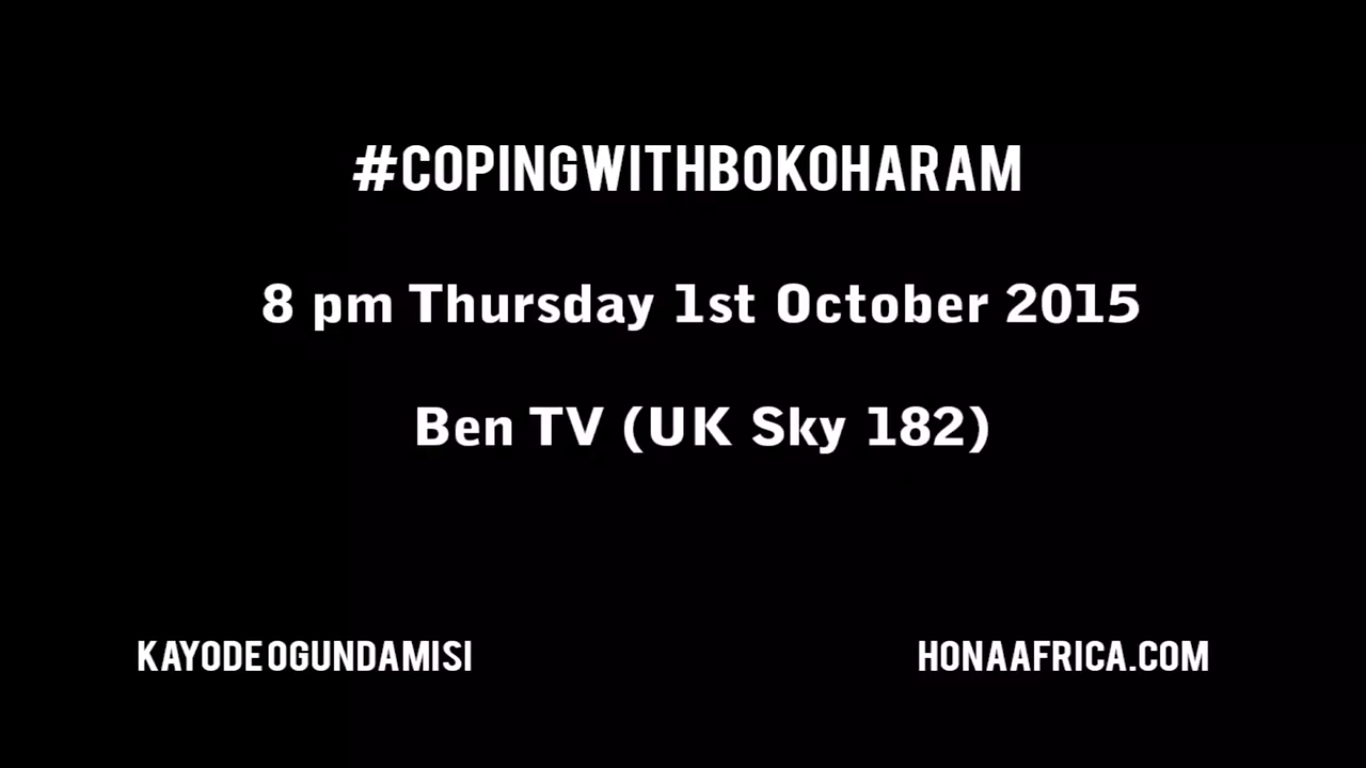 Part one, “Reclaiming Maiduguri” focuses on Maiduguri, a 30 minute drive from Sambisa, the stronghold of Boko Haram. It examines how the people are trying to survive and coping with the Boko Haram insurgency in the town. It looks at the contributions of volunteers from a variety of sectors including healthcare and education as well as NGO organizations that refuse to leave the supposedly dangerous areas.

It also looks at how the people have been surviving, featuring discussions with members of public in markets in Maiduguri, and an opportunity to see places that have been targeted by Boko Haram terrorists.

Part one also shows the relic of the mosque which was founded by the late leader and Founder of Boko Haram Mohammed Yusuf, where he used to live, at the railway compound. He used to rally and address thousands of followers and people at the site which was the foundation of the Boko Haram movement. These areas are seen as unsafe and not accessible to journalists, even those chaperoned by the Nigerian Military, as local residents are still viewed as still being sympathetic to Boko Haram.

The Documentary explains the urban nature of the insurgency and the often misunderstood collaboration between military and the local/civilian Joint Task Force.  The civilian JTF are volunteers who have organized themselves into vigilante groups to address the Boko Haram insecurity in Maiduguri and the Documentary will focus a bit on how they operate. Kayode also spoke with the Borno State Attorney General on the legitimacy of a vigilante militia in the state.

Part two of the Documentary, Inside The IDP Camps” focuses entirely on the Internally Displaced Persons; their new lives as refugees, their living conditions, their experiences of being displaced, their suffering and how they have overcome the challenges.   Part Two also includes interviews with volunteers working in the camps based in Maiduguri and Abuja, which are a reflection of other IDPs camps across Nigeria. It concludes with an exclusive interview with the Special Assistant on Media to the President of Nigeria, Mr. Femi Adesina.

The Documentary succinctly describes and shows the resilience of people in the face of adversity, and also in some ways, how ordinary and regular the lives of those affected by the violence really are.  Yet even with their “ordinary lives” the stories of survival are in fact extraordinary.

The Documentary reveals the shocking fact that Boko Haram was initially supported by large numbers of people, who genuinely thought that the preaching of Boko Haram founder provided an alternative to the neglect of Nigerian governments over the decades.  It focuses on this in particular with regards to the corruption of and impoverishment of Northern Nigeria by the Northern economic and political elite.  The film also shows how people have accepted the crisis as a way of life, and developed ways in which to cope and to survive.  As illustrated through the interviews, a lot of residents said they could differentiate between the gun shots of the Nigerian Military with those from that of the terrorists and planned their activities and lives accordingly.

‘Coping with The Boko Haram Insurgency’ shows that corruption remains an issue in the IDP camps.  There are large number of children who are out of school given that schools have been closed for over two years in Maiduguri, an after effect of The Chibok Girls kidnapping. Alternatives to educate the children and prepare them for the future remains are few and far between despite the efforts of NGOs.

The people of Maiduguri need help and support in order for them to go beyond coping with Boko Haram to finally living without them completely.

The film will be broadcast exclusively on www.saharareporters.com  Premium Times Nigeria and BEN TV SKY 182 on the 1st October 2015.