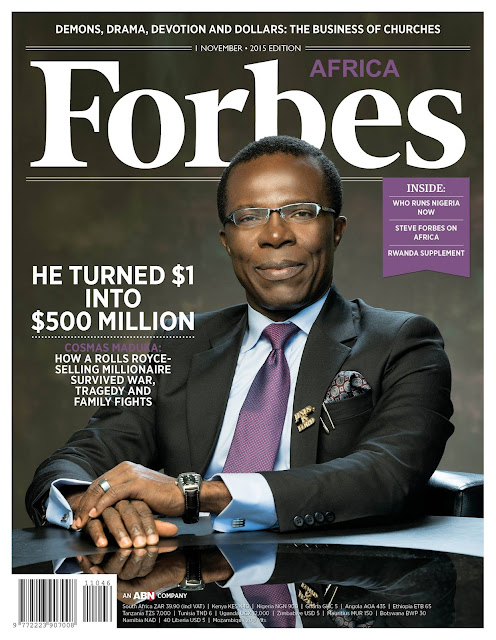 All in Forbes Africa November 2015 issue. It has been rocky road for Cosmas Maduka, who started out fixing cars and now makes millions selling them. The Forbes Africa featured millionaire started Coscharis from scratch and built it into a conglomerate. If he can do it, so can you.

His success story is quite an inspiring one and as he graces the cover of the November 2015 issue of Forbes Africa. For the business magazine, he is dubbed ‘The $500-Million Survivor’.

His feature outlines his success story. He went for seven years without pay, showering in the street, scrapping with his brother. Fired by his uncle and fired at by his wife’s uncle is just few of his many short comings. “I slept in the shop and I recall some children mocking me on their way to school. They laughed at me for sleeping in the shop but I told myself that I would be better than them in the next six years“. he said during one of his interviews.

“Although I left school at Primary three, I tried to do some research and find out how I could take some parts from a Volkswagen car and fix into a Honda. I was always curious to know which automobile parts could work on another brand. For three years, I worked tirelessly with my uncle and he opened a branch in Jos. I went there to manage it; he opened another one in Sokoto, I was there“. he added.

Cosmas Maduka shares how he survived war, tragedy and family fights to turn $1 into $500 million in the November 2015 issue of Forbes Africa.