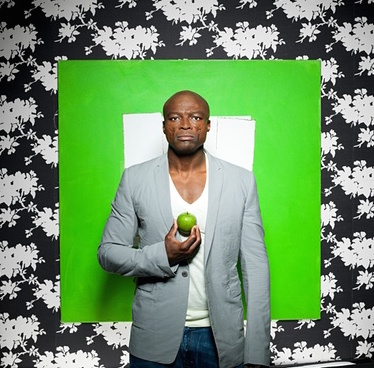 Prior to the release of his new album, Los Anglelos based British soul and R&B singer Seal during an interview talked about his English foster parents, his Nigerian father, his German ex-wife (Heidi Klum) and much more. Read below.
I was born in Paddington but went to Romford in Essex to live, from age zero to four, with foster parents who were English and Caucasian. I have vague memories of lots of fried eggs, with mashed potatoes and possibly bangers.
I went to live with my father and his wife, my stepmother. I started eating Nigerian food, made by my father – so my diet changed completely, to the food of my heritage. Cassava, okra soups, fish stews. I remember helping Dad make moi-moi and frejon at Easter, soaking the best beans in hot water for at least 24 hours before going through the arduous process of rubbing off the skins and blending the naked beans into the creamiest paste.
I remember walking to Harrow Road to shop for food. I was the designated shopper, sent by my father to pick out exactly the right cuts from the butcher, and tomatoes, onions and other vegetables from the grocers, which all had to be perfectly ripe and unbruised. I don’t know whether Dad appreciated it. I suppose when I didn’t get a thick ear it meant he appreciated it.
Goat tripe was Dad’s favourite and I remember cleaning it for him on numerous occasions. After the correct amount of soaking, two people would hold an end each while I’d scrape off all the crap with a blade. My father was a very good cook. I’ve been to Nigeria and I’ve eaten the same dishes he used to make in Kilburn, only his were better.
In the 80s I was a poor working-class boy from Kilburn, seemingly confident yet insecure underneath, aspiring for a better life. I hung around Chelsea where everything seemed fresh, exciting and wonderful and everyone beautiful and wealthy. I certainly didn’t dine there. Are you kidding me? I couldn’t afford to even think about it. Eating out was chips or a Cornish pasty in Kilburn.
I moved to California in 1992. Food there doesn’t have much taste, to be honest. After a while you get the feeling it all tastes the same, for the most part. The quality of the ingredients isn’t very good. There’s more concern over the appearance and quantity of food than the taste and quality. It’s very hard, even when buying food under the moniker of ‘organic’, to get food that hasn’t been genetically assisted or chemically expedited. There’s lots of bending of rules.
I also have a place in Mexico. Most Mexican food is just terrible – a ridiculous fat diet with lots of re-fried stuff and loads of beans and oil and cholesterol and urgh. They make things like flan for dessert with condensed milk and sugar and more sugar and then more condensed milk with more sugar. We Nigerians aren’t big on desserts. Yet what I do marvel at in Mexico, compared with California, are the tastes of the fruits. They’re smaller fruits but look healthier and subsequently taste so.
The greatest food on earth is Italian and you have to go to Italy for great Italian food, because it’s about the way the produce is grown. The most spectacular meal I have ever had was tagliatelle in Venice five years ago. I was really hungry and someone prepared it with tomatoes and salmon and just a little olive oil. I can taste it now. My mouth’s watering thinking about its simplicity and perfection.
Before I got married to my ex-wife [the model Heidi Klum, she cooked me schnitzel and potatoes, and it was romantic and very hearty and I thought: “Oh, this is quite amazing.” That was the final time she was in the kitchen. A one-time offer only.
They don’t do good sausages in California, that’s the problem. I had sausages, bacon and scrambled eggs with HP sauce this morning at the Soho Hotel and it was just delightful. None of those fancy, knobby chicken sage sausages they sell in the local delis in Malibu. At least you can have a proper pork sausage in London.
Seal’s new album 7 is out now on Reprise Records
Source: the Guardian