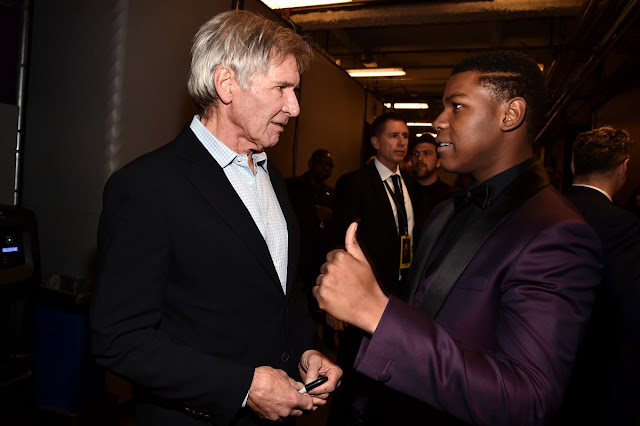 Mr Ford, who was in London for a brief visit, agreed to visit the restaurant situated along Old Kent Road, taking staff there by surprise when he showed up.   Staff and customers alike were stunned when Boyega, 23, who was plucked from relative obscurity to play storm trooper Finn in the latest instalment of the sci-fi spectacular, arrived 805 accompanied by the real-life Han Solo.

Boyega recently landed a leading role in STAR WARS: The Force Awakens and before the publicity frenzy surrounding the launch of £2bn spectacular started, he decided to pull a marketing stunt of his own.   One surprised 805 waiter asked: “Are you Harrison Ford?” to which the famously gruff actor replied: “I used to be.”

The fast rising young actor said the star-studded European premiere in Leicester Square last week was particularly special because he is from London. He added that Mr Ford asked him to be shown around the area where he had grown up, hence the decision to go to 805.    “In order to break Harrison into the London culture I took him to the Old Kent Road to have some Nigerian food and he loved it,” Boyega added. During their meal, Mr Ford steered clear of exotic dishes like spiced gizzard and diced cow foot, instead ordering traditional Nigerian egusi soup and pounded yam, for £15. He apparently then washed it down with a non-alcoholic cocktail.

The Restaurant manager Prosper Djoufak, said: “I didn’t recognise him but a customer realised and they asked me if it was Harrison Ford. At first I said no as I didn’t believe it was him.     “I’ve watched his movies but he’d lost weight so he looked a bit different but when I went back I realised. I asked him if he was Harrison Ford and he said yes and he was just like a normal person, nice and very quiet.”   His colleague Thierry Nkowyeb, 32, added: “We’ve had a lot of African footballers come in here but Harrison Ford is such a big star. It was a great honour for us, so for him to come in and dine with us, we feel like we are in Hollywood as well.”