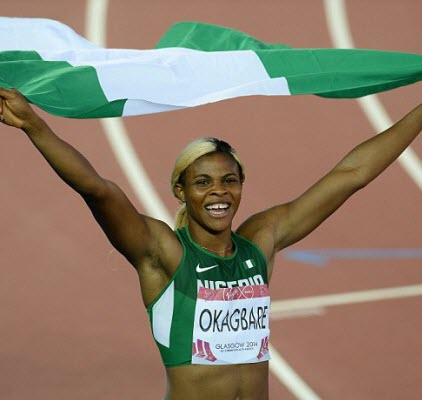 Nigerias popular track queen Blessing Okagbare has entered the Guinness Book of Records as the athlete with the highest number of Diamond League appearances after it emerged that her 38 showings beat that of anyone else. Currently the Commonwealth Games 100 and 200 sprint champion, Okagbare is the only Nigerian athlete to have won two goal medals at an international athletics meeting.

Last year, Okagbare was voted Nigerian Sportswoman of the Year and her latest accolade, looks set to make her the country’s best athlete of all times. A Guinness Book of records spokesman said: “Multi-discipline athlete, Blessing Okagbare from Nigeria participated at 38 Diamond League events between July 3, 2010 and September 5, 2014. Okagbare’s specialities are the 100m and 200m sprints and long jump.”

In sports, the International Amateur Athletics Federation (Iaaf) Diamond League is an annual series of track and field meetings. Begun in 2010, it was designed to replace the Iaaf Golden League, which held from 1998 to 2010, with the next meeting due in London in 2016.