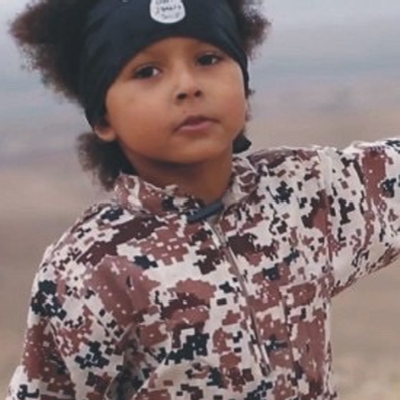 A london-based Nigerian Christian Henry Dare identified a five year old child used in an Isis propaganda video as his grandson who has been taken to Syria by his daughter Khadijah who converted to Islam. In this recent chilling video, Isis showed the kid wielding an AK47 Kalashnikov rifle and upon seeing it, Mr Dare recognised the child as his grandson Isa, who has been previously used for propaganda purposes on social media. According to Mr Dare, Isa is one of the sons of his daughter Khadijah, who has also been used as a figurehead by Isis.

“I can’t disown him as he’s my grandson and I know him very well. He doesn’t know anything as he’s a small boy and they are just using him as a shield.” Said Mr Dare.

In the video, Isah appeared at the end of the 11-minute clip wearing military fatigues and warned in English: “We are going to go kill the kafir (non-believers) over there.”

In the gruesome video that was fronted by a masked man with a British sounding accent, Isis showed the murder of five men. In a warning to British Prime Minister, David Cameron, who recently joined the coalition against Isis, the man threatened attacks in the UK.

Khadijah Dare, who grew up in Lewisham, was born to Nigerian Christian parents but converted to Islam as a teenager before leaving for Syria. In 2014, she posted a photograph on her personal Twitter account of her then four-year-old son Isa, meaning Jesus in Arabic, smiling with an AK-47 rifle.

Videos in which she talks about her new life in Syria, practises firing a Kalashnikov or appears with her young son and jihadi husband, have been in the frontline of the propaganda war. Her account, or those linked to her, are known for posting pro-Isis messages on various social media sites encouraging other young women to make the journey to the war zone and she is one of the first known western women to have travelled to Syria.

Khadijah added: “Alhamdulillah, I couldn’t find anyone in the UK who was willing to sacrifice their life in this world for the life in the hereafter. I prayed and Allah ruled that I came here to marry Abu Bakr.”

Mr  Dare said he had spoken to his daughter, who was christened Grace before she converted to Islam, weeks ago but added that since then, he ignores her calls because she has brought shame to the family and herself. Khadijah Dare comes from a devout Christian household and in 1987, her family moved to Britain from Nigeria.

Her mother, Victoria Dare, said that her daughter was someone who had previously been zealous in practising her Christian faith. At college in London, she studied media studies, film studies, psychology and sociology and enjoyed watching football on television but her life turned when one day announced she had converted to Islam and changed her name and later, she married a Swedish Muslim who recruited her to the Isis cause.