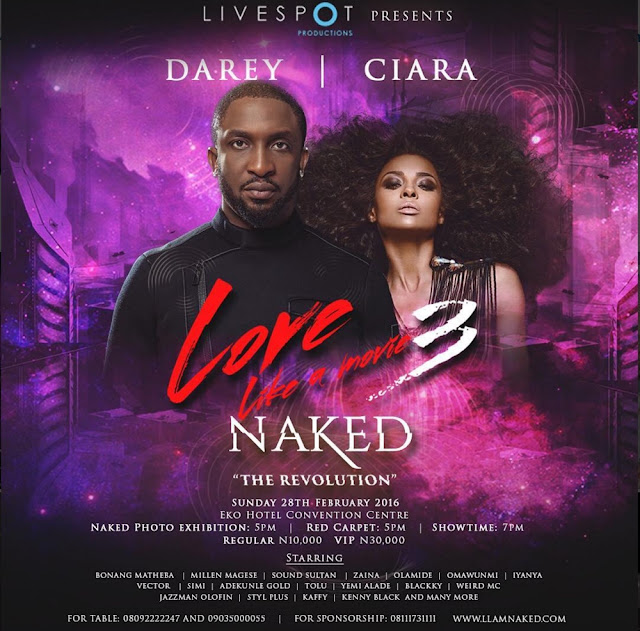 Darey’s Love Like A Movie 2016 holds on Friday 28 February 2016 at Eko Hotel Convention Centre, Victoria Island, Lagos is set to feature a guest performance from award-winning international R&B artiste and actress Ciara.
Coming after the two well-received editions that featured some of Nigeria’s finest artistes including 2face Idibia, Praiz, Kaffy, Tiwa Savage and Zaina in addition to global superstars Kim Kardashian and Kelly Rowland, Love Like A Movie 3 promises to redefine the concert series and take it into the future.
The dance diva will be performing at the Love Like a Movie 3 alongside the biggest names in Nigerian music including Omawumi, Yemi Alade, Iyanya, Olamide, Sound Sultan, Vector, Simi, Adekunle Gold, Tolu, Zaina, Sammy, Blackky, Styl Plus, Jazzman Olofin, Weird MC and many more.
Commenting on the upcoming concert, Darey recently remarked,
“Love Like A Movie 1 set a new standard for a show of its kind in Nigeria. Love Like A Movie 2 last year took that standard to the sky. Love Like A Movie this year will be the edition that redefines the concert experience in Nigeria and takes it into the future. I am extremely excited to explore new ground and I look forward very much to sharing the experience with fans at the Eko Convention Centre on February 28. Be there!”
Love Like A Movie is a futuristic dance party that uses choreographed dance, dynamic lasers, symphonic lights, sound and high energy performances to tell the great story of Love. This year’s edition will feature performances from some of Nigeria’s best music and dance performers as well as a surprise international act.
Love Like a Movie took Nigeria by storm in 2013 when it’s red carpet fashion police was co-hosted by international superstar Kim Kardashian. Featuring the talents of Banky W, 2baba, Ice Prince, Waje, Timi Dakolo, Cupid, Tolu, MoEazy and Darey, the show set a new bar for live music performance and event production in Nigeria, catching a lot of attention in national and international media for weeks and months afterwards. The following edition recorded even greater success featuring the talent of former Destiny’s child member Kelly Rowland.