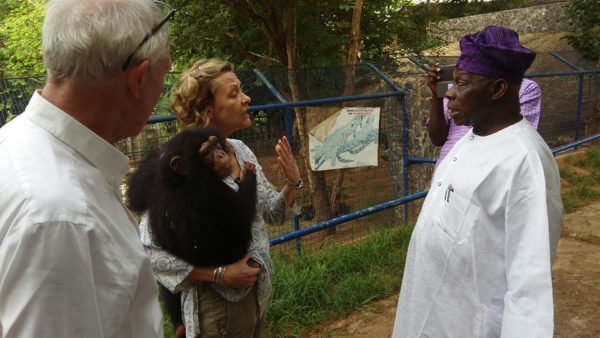 The former president of Nigeria Chief Olusegun Obasanjo donated a three year old chimpanzee he named Patience to a non-profit animal conservation organisation the Pandrillus Foundation as part of his contribution to protecting the environment.

Patience previously lived on Chief Obasanjo’s wildlife park at his farm in Otta in Ogun State but the former president has decided to offer it as his contribution to the a non-profit organisation. Pandrillus Foundation founders Liza Gadsby and Peter Jenkins, said Chief Obasanjo decided to leave Patience in their care so as to help raise awareness about the special care needs of chimpanzees.   Ms Gadsby and Mr Jenkins said Chief Obasanjo was interested in Patience growing up in the forest as part of the large chimpanzee group at Drill Ranch Afi Mountain.

Pandrillus Foundation, who have been operating in Nigeria since 1988, said that Chief Obasanjo visited Drill Ranch in 2001 and made a follow-up visit in 2011.

Mr Jenkins said: “Patience is a fantastic chimpanzee who has been well cared for by the staff of the Olusegun Obasanjo Presidential Library Wildlife Park. Once she has completed her medical screening in Calabar, she will join the group at the newly completed Nigerian Chimpanzee Centre located at Drill Ranch Afi Mountain in Boki Local Government Area of Cross River state.”

They thanked the former president for his gesture, and pledged to take care of the animal. The founders of the animal conservation centre said they have embraced the challenge of preventing the extinction of the highly endangered drill monkey Mandrillus leucophaeus, and its mission has expanded to include chimpanzees and other wildlife that share the drill’s habitat.