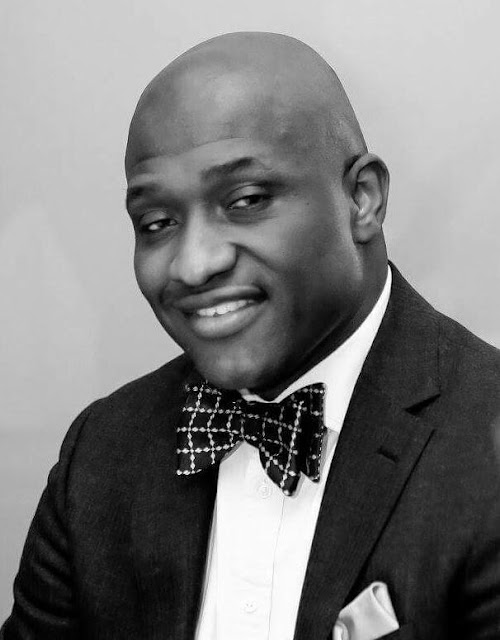 Central Association of Nigerians in the UK (Canuk) chairman Babatunde Loye who was elected last year has been suspended by the executive committee pending the investigation of allegations of impropriety against him.

Reeling from the effects losing every vote at last weekend’s annual general meeting (AGM), Mr Loye has been under pressure to resign over the last week but has insisted he will soldier on despite the opposition. Last Thursday, the executive committee decided to act and suspend Mr Loye, asking first and second vice chairmen Alex Achebe and Charles Sylvester to act as co-joint chairmen for now. At the meeting which took place in central London, 11 members of the executive attended, with seven voting for his suspension and four voting against.

A day after the meeting, the executive then met with the acting high commissioner Ambassador Simon Ogah who asked to be briefed about the crisis in Canuk. Following the rancorous AGM during which Mr Loye failed to win at least one single vote, several delegates called for the removal of the entire executive.

Delegates were particularly incensed about the fact that Mr Loye and his right hand man former financial secretary Peters Omoragbon brought private security guards to the AGM venue to lock perceived opponents out. Earlier this week, the executive decided to remove Mr Omoragbon, saying he brought Canuk into disrepute for claiming he is the Canuk international liaison officer. Being co-opted Mr Omoragbon could be removed by a simple majority and was subsequently excluded in line with the provisions of the constitution. 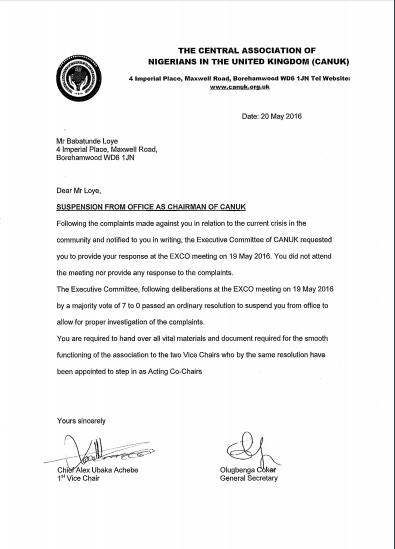 It is unclear if Mr Loye will accept the suspension or try to challenge it. In addition, it is not yet clear if his suspension will be lifted ahead of the forthcoming emergency general meeting due to hold within the next three months.

Here is a more detailed explanation from one of the committee members Mr Akinfe Ayo on the issue.

“Why do we have this Canuk wahala?

[1 A lot of you have been asking me what is happening within the Central Association of Nigerians in the UK (Canuk), so I thought I should write this brief piece to address your concerns. Essentially, we have one big problem. The chairman of Canuk, Babatunde Loye elected last year, is an immature, insecure and spoilt young man. He clearly grew up during the military era in Nigeria and is of the erroneous opinion that he has the power of life and death over everyone. He sees Canuk as his private property, kind of similar to the way Sani Abacha thought Nigeria was his to do with as he pleases

[3 Despite all of this some of us still persevered with him, hoping that he would see the errors of his ways and retrace his steps but alas, the man got worse by the day. He surrounded himself with two other excos – Ronke Adeagbo and Peters Omoragbon and they decided to ride roughshod over the entire executive committee of 14. Decisions were taken by the exco but Mr Loye decided to ignore them and do what he wanted to. At one stage, the Canuk secretary, vice presidents and other excos were finding out what was happening on the Internet and pages of newspapers. I know because whenever I published my own news, they used to ring me to ask what is happening

[4 In the autumn of last year, Mr Loye went to Abuja for Diaspora Week and was not happy that he was not the centre of attention. He thus decided to “show the whole world who he is.” There and then, he and Omoragbon and Adeagbo decided to organise the December dinner & dance event in December 2015. They printed invites in Abuja and invited people like Abike Dabiri-Erewa without even letting the exco know. He spent £17,000 on this event without authorisation from anybody

[5 Things took a turn for the worse in December 2015 when Mr Loye organised the Canuk dinner and dance event. He asked the committee to draw up the criteria for award nominees and come up with as shortlist but alas, he had already printed the plaques. He knew who he was going to give awards to before the event even began. I served on that committee and can tell the whole world that at no stage were the names of Pastor Agu and Kate Osamor MP ever mentioned. I was shocked to see them receiving awards on the night. On the night in question, Mr Loye turned it into his private party. The five minute presentation about Canuk was just about how wonderful a leader Loye is. Only in North Korea do you see such presentations about “The wonderful and great leader.”

[6 There is a Greek saying: “He who the gods want to destroy, they first make mad.” Mr Loye finally lost the lot when he visited Nigeria earlier this year. He went to Abuja to see former high commissioner to the UK Ambassador Olakunle Bamgbose, who is currently a permanent secretary. Ambassador Bamgbose told Mr Loye that they intend to set up a Diaspora Commission and would want a diasporan to head it. However, he told Mr Loye that it would take a few years to achieve as the bill had to pass through the National Assembly

[7 Mr Loye expressed an interest in being appointed to the job but Ambassador Bamgbose told him that he is not experienced enough and he needs a few more years of leading a diaspora body. Subsequently, Mr Loye decided that he could kill two birds with one stone by changing the Canuk constitution to stay beyond his term of 2017. This would enable the bill to be passed and would also allow him acquire more experience. As part of the strategy to get Mr Loye appointed as the chair of the Diaspora Commission, his sidekick Peters Omoragbon arrogated to himself the title of “International Diaspora Liaison Officer” and began lobbying Nigerian communities worldwide, asking them to write to Ambassador Bamgbose to express their support for Mr Loye. Heaven knows how much they got from Abuja to execute this project

[8 Canuk’s constitution does not allow you to serve for more than two terms in any capacity. Mr Loye has served as assistant social secretary for two years and as chairman for two years. He subsequently decided that constitutional review was his main priority. His third term agenda involved allowing himself to stay until 2019. Egged on some sycophants like Adeagbo, Omoragbon, Adedamola Aminu, Grace Alexander, Dolapo Ajakaiye, Sunday Popoola, Anna Mbachu, etc, he recruited a Dr Ife Akintunde to chair the review committee and do what he wanted irrespective of what the committee decided. The constitutional review committee rejected tenure elongation but alas, it was in the final draft

[9 Three members of Mr Loye’s executive have resigned in disgust and he is making more enemies by the day. Even Dr Akintunde was promised that his reward would be that he would be allowed to present the constitutional review to the Canuk AGM. On the morning, Mr Loye told Dr Akintunde that he cannot as it is his baby. Dr Akintunde was furious on the day and made his displeasure very clear. No one likes being used but as they say: “If you want to sup with the devil, always use a long spoon.” I used to have a lot of respect for Dr Akintunde but I have no sympathy for him here

[10] To try and get his way, Mr Loye got private security guards (Breaching every known diplomatic protocol) to lock his real and perceived opponents and enemies out of the hall. He also paid the transport fares of several supporters, he told the AGM that observers were not allowed to speak and used every trick in the book to get his way. However, he did not win one vote on the day. To add to his woes, the executive has removed his right hand man Omoragbon. As things stand, Mr Loye’s position is totally untenable. He should just do the honourable thing and resign with dignity. He is going to be impeached at the forthcoming emergency general meeting, so why not go with some pride now?