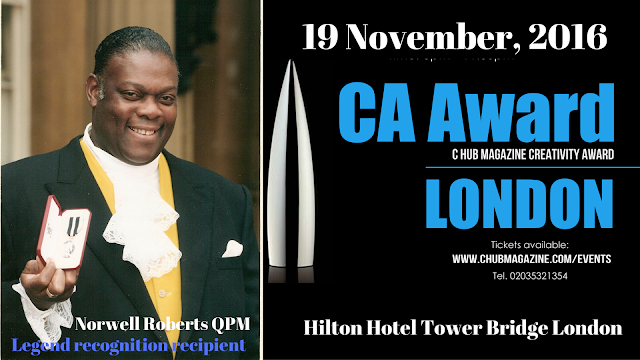 Norwell Roberts QPM to receive CA award legend recognition C. Hub magazine today announces the decision to award Norwell Roberts with the highest category of the Creativity Award, Legend award in recognition and honour of his selfless and long dedication to the safety of the Community and his determination to pave way for the next generation.

Roberts also ran an attendance centre in Mill Hill for young offenders on weekends. Roberts has lectured at Universities,schools and colleges around the UK.

Roberts received police commendations on three occasions, one of which was for his involvement in 1985 when he was part of a squad who arrested five people in six days for a contract killing. Metropolitan Police Commissioner, Sir Robert Mark praised Roberts’ contribution towards better relations between white and black communities.

Mr Norwell  subsequently  was awarded the Queen’s Police Medal for distinguished service in 1995.

On 15 March 1996, Roberts attended Buckingham Palace where he was presented with the medal by Prince Charles. During the presentation, Prince Charles told Roberts that , “We need more people like you.”

Despite stiff challenges and racism, Mr Norwell’s determination was never shaken.  When he made the decision to join the Metropolitan Police in 1967, aged 21, Roberts became a target of both public and media scrutiny. He became the most conspicuous officer and his every move would make headlines .

Receiving the news of his appointment to receive the highest recognition at the  prestigious C. Hub magazine Creativity Award which celebrates and recognises the best talent and contributions of African and Caribbean creatives globally; he said,  “I am indeed humbled by your decision to present me with this award. I was at Hendon Training School on Friday 10th of June, at the Last Passing out Parade and was so pleased to be approached by many Black and Asian Officers of all ranks who wanted to meet me knowing that I was the first Black Man to join the Metropolitan Police in 1967.

As you can imagine it was not easy. I had to succeed, because I had to prove to myself and others too that one can attain and achieve whatever they want by resilience and determination whilst in the face of severe adversity. I would like to thank those who suggested me for consideration. I really look forward to the occasion.”

Emeka Anyanwu, C. Hub magazine publisher and the awards organiser said, “We are extremely glad to have Norwell Roberts to be one of our highest award recognition recipients  this year. He is the epitome of what CA award stands for. C. Hub magazine Creativity Award is the most prestigious platform to thoroughly reflect, recognise, celebrate and highlight the great talent and creativity of African and Caribbean men and women. This cannot be overstated how talented and the immense contributions that people of African and Caribbean make in the betterment of our world which are often overlooked and brushed aside. We can no longer wait by the side hoping that anyone else should take the responsibility of giving our people a pat on the back.”
Please follow and like us: