HomeMoviesThe Trailer for “93 Days” A film inspired by the Ebola Crisis...
Movies

The Trailer for “93 Days” A film inspired by the Ebola Crisis in Nigeria Is Out! 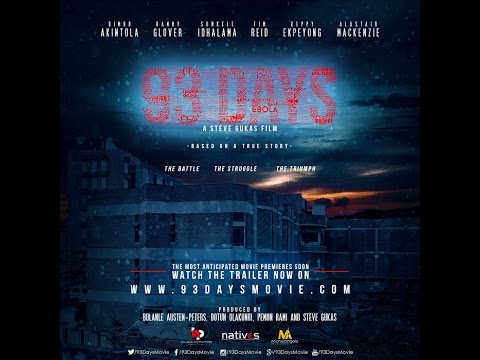 The first official trailer for ’93 Days‘ a movie inspired by the Ebola Crisis in Nigeria is finally out. Directed by Steve Gukas, and starring actors such as Bimbo Akintola, Danny Clover among others. Checkout the amazing looking trailer below.

The last time 93 Days was in the headlines, it was due to a battle between the producers of the movie and the family of Nigeria’s Ebola heroine Dr Stella Ameyo Adadevoh. We would assume that the issue has been resolved.

When Patrick Sawyer a Liberian American collapses upon arrival at the Murtala Mohammed International airport, Lagos – Nigeria. He is taken to First Consultant Hospital, where he is admitted with fever like symptoms.

Against his denials of contact with any Ebola victim in Liberia, the team at first consultant led by Dr. Ameyo Adadevoh quickly deduce there is more to his case than malaria. Their vigilance leads to an early detection that Mr Sawyer indeed had the Ebola Virus disease. Now it’s a race against time to contain a deadly disease from breaking out and infecting an entire city population and beginning what could be the biggest deadly disease outbreak the world has ever known.
The scare is palpable across the country. The doomsday scenario imagined is here.
Over a 93-day period from when Sawyer comes in men and women from Nigeria, WHO and MSF do battle with this deadly disease. At its core, 93Days is a compelling human story of dedication, sacrifice, resilience and survival.