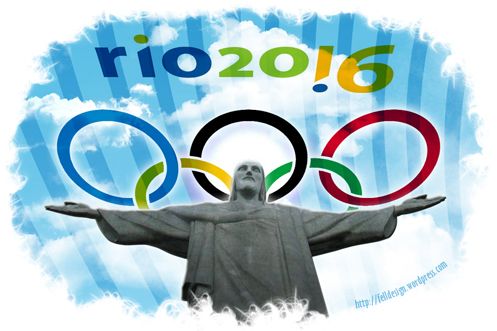 In some other countries of the world, a bronze medal at the Olympics is not something to be talked about or celebrated. Not even silver is satisfactory sometimes, just remember that look on Russian athlete Yulia Efimova’s face as her arch-rival, Lilly King of the United States took the gold in 100m women’s breastroke swimming. Nothing but gold is good enough – afterall, the Olympics is the biggest showcase of human talent on the planet and a demonstration of man’s capacity to express himself or herself to the limits and excel.

In the US for example, there is an obsession with gold at the Olympics, this being an extension of the average America’s patriotism-driven belief that the United States is the centre of the universe. The US has the largest number of gold medals in Olympics history.

“Go for Gold” is the classic Olympics slogan, but we have also seen in the on-going Rio Olympics, episodes after episodes and tales of human ingenuity in addition to memorable events: so much hardwork and dedication – Michael Phelps winning three gold medals and still counting, so far bringing his total Olympic gold medals to a record 21, Uzbekistan’s 41-year old Oksana Chusovitina participating in her seventh Olympics as the oldest gymnast on parade, and making it to the finals, 19-year old American Simon Biles putting pure genius on display in the gymnastics, team refugees participating for the first time in the Olympics, Kosovo winning its first Olympic medal (gold!), a marriage proposal on the field showing love is more important than gold, well, an Egyptian, Sara Ahmed won a trail-blazing historic bronze in weightlifting, the mighty falling – Novak Djokovic, Serena Williams and Venus Williams crashing out of tennis, Chris Froome coming up short in cycling, and on the side lines, BBC female presenter, Rebecca Adlington reaching out under the table to squeeze Mark Foster’s thigh, and on the minus side, the organisers getting China’s flag wrong, mixing up national anthems including Nigeria’s, complaints about living conditions at the Rio Olympics village, and on the streets, a marvelous opening ceremony, and a generous display of Brazilian female nudity, and on the dark side: young Brazilian hoodlums, robbing visitors of valuables with such unpatriotic brazenness. It is less than a week, so far, but the tales are of characteristically intriguing and historic dimensions.

But again, we must not forget this: the Olympics is about the victory, and about national glory and pride. To win the gold, a country must be prepared, and its athletes must be prepared to show the excellence, the resilience and the courage that is the hallmark of the event. When the issue is not about gold however, it is about, on the humanistic side, the kind of courage in the face of adversity demonstrated by British athlete Derek Redmond at the 1992 Barcelona Games, when he tore his hamstring and simply refused to give up, reaching the finish line of the semi-finals, hanging on his father’s shoulder. The Olympics since the first modern one in 1896, has been about the human being and the many possibilities of human aspiration in the face of challenge.

Nigeria has participated in the Olympics (the Summer Olympics) 15 times, 1952 -2016. And over that period, this country of over 180 million people, has been able to win 3 gold medals (Chioma Ajunwa, 1996, Dream Team 1996 Atlanta Olympics, Men’s 4 x 400 metre relay team, 2000 Sydney Olympics), 8 silver, and 12 bronze medals, making a total of 23 Olympic medals. No cause for despair. After all, we are better than some 73 countries, which have never won a single Olympic medal, countries like Somalia, Chad, Swaziland, Oman, Palau, Benin, Belize, Cape Verde, American Samoa, Equitorial Guinea, Central African Republic, Congo, Malawi, Mali, Palestine, Nauru, Lesotho and Oman. My take however is that we could have done much better, if this had been a different country, if successive governments had paid more attention to sports as a tool for international glory and achievement.

Our poor record is the cumulative effect of the failure of the Nigeria Olympics Committee, the lack of political will in government at all levels to promote individual talent in sports on a sustainable basis, and the Nigerian disease: last-minute syndrome which means everything is done at the last minute, things that other countries spend years and resources preparing for, we wade in at the last minute and expect that miracles would happen. Major breakthroughs in sports in Nigeria as in everything have been either through miracles or individual sacrifice. Our sports community, active and retired, is made up therefore of angry and frustrated men and women who feel that they have been used and forgotten by their country, the serving ones are so poorly treated they even sometimes wonder why they are still wearing Nigeria’s caps. At the Rio 2016 Olympics, there is a Lawrence Okolie and a Christine Ohuruogu on Team Great Britain and yet another Nigerian running up and down for Italy. Nigeria has got talent. Point.

But we do not know how to use, nurture or encourage those talents. There are probably thousands of Michael Phelps in the Niger Delta who can swim from creek to creek, Olympic style, but who are busy carrying guns and looking for cheap wealth; if you go to the Mid-West, there are probably hundreds of girls who can swim better than Lilly King, Yulia Efimova and Katinka Hosszu put together, but all that talent is probably being wasted in a thigh-raising whorehouse in Benin or a city in Italy, because the Ogbe stadium is ruined and nobody has bothered about discovering the natural flying fishes in that part of the country. When I see the Olympic gymnasts doing their thing, I think of the many talented young girls in Nigeria, who due to lack of opportunities are busy putting their lithe, capable sporty bodies to other uses. Developing the sports sector does not require too much imagination: you just need to start, catch them young, groom them, give them opportunity. That is why a 16-year old from Chile can stand out in archery, and a 19-year old teenager from America, Simone Biles, can be an embodiment of human perfection. We have the people, the potentials but…

We are most certainly not prepared for big events that require state planning. It is particularly ironic that we have done much better as a country in the Paralympics – 22 Gold, 11 Silver, 12 Bronze since 1992. You can interpret that literally, I don’t want to spell it out and offend the valiant men and women who have done us proud in that alternative Olympics. What is painful is that Segun Toriola, seven times Nigerian Olympian had warned us quite early that the preparation for this year’s Olympics is the “worst Team Nigeria in Olympics history.” Underline the word, “worst”, and it looks like he is right. Before the Olympics, we heard the embarrassing story that Nigerian athletes going to the Olympics- 78 of them, 49 male, 29 female, participating in eight events (we seem trapped here!) had been asked to go and fund themselves, cap in hand. To worsen matters, the Sports Minister, the Sports Ministry and just about anyone who needed to use their brains, started sounding like Emperors.

The Nigerian soccer team, called Dream Team VI was stranded in Atlanta, Georgia, USA, and the Minister’s informed response was “who send them there?” The teams trip to Brazil was postponed from Friday to Monday, to Tuesday and to Wednesday, no money, no support. The Dream Team eventually arrived in Brazil on the wings of charity: Delta Airlines had to airlift them free. They arrived a few hours to their opening match, jet-lagged, without allowances, hungry, and with a coach, Samson Siasia, who had also not been paid for five months, and yet the boys went ahead, to beat Japan, 5-4. That is the spirit of the Olympics. Dream Team VI, (we really like to dream!) has since qualified for the quarter-finals, and they may well surprise the world. No one expects that they would, maybe the Nigerian government (which likes to reap where it has not sown), but whatever happens, those boys and their coach are heroes already, and should they manage to win any medal, that medal should be presented to Delta Airlines, not Nigeria, and when that is happening, Solomon Dalung must not be anywhere near the room. Well, they say he has apologized, but must we run Nigeria’s international appearances on the basis of apology?

That is what we are doing. Better-focused countries are celebrating gold medals, we are here celebrating courage in the face of adversity: the biggest story we would probably take out of the Rio Olympics. Besides the Dream Team VI, I have seen very enthusiastic comments about how Segun Toriola is a seventh time Olympian in table tennis, and how Nigeria has produced the first African to qualify for the Quarter Finals in table tennis in the person of Aruna Quadri, and the first Nigerian rower, Chierika Ukogu. Ms Ukogu had to sponsor herself to the Rio Olympics. She had to beg for funds, and travelled on the wings of charity too. She qualified for the quarter finals and got Semi-finals C/D ranking and we are now all so proud of her, but deep in her heart, she would know that the country she promoted so much at the Rio Olympics, does not really care for her. And that is sad. There was also the Nigerian basketball team. They put up a valiant fight for love of country, but I doubt if any one of them is home-made. When will Nigeria begin to make its own athletes and geniuses, and not leave its responsibility to pure chance and accidents?

I salute the courage of all the badly treated and frustrated 78 Nigerian athletes currently fighting for our country at the Rio Olympics. They are patriots and they are all deserving of our appreciation for their faith in Nigeria despite the odds, representing Nigeria, in badly sewn track-suits. They may not win any medal- we understand! We would still be proud of them. It is their type that reminds us that indeed, there is still a country and for that alone, we must be grateful.