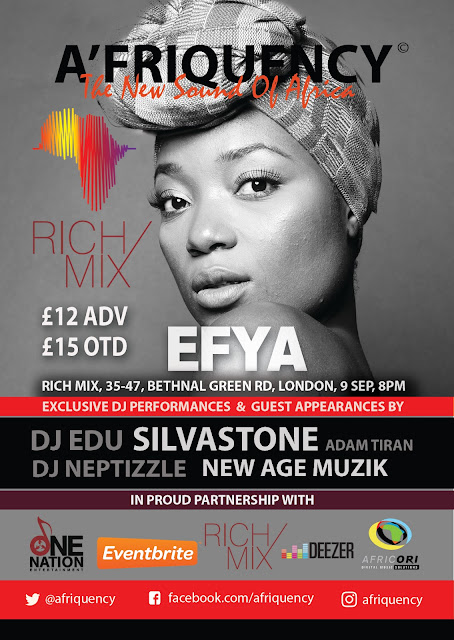 Heading up the bill will be Ghanaian R&B-soul goddess, Efya, who arrives for an exclusive London performance and her first in the UK for over five years. The Kumasi born songstress is Ghana’s leading light and occupies the heady space of pop royalty across West Africa. She arrives to A’friquency off the back of her hugely anticipated debut album Janesis which eloquently joined the dots between afrobeats, neo-soul and trap and featured heavy hittersSarkodie, Ice Prince and Stonebwoy. Her recent slick collaborations with fellow GhanaiansMr. Eazi and E.L. have made waves right across the afrobeats world and aided the sound’s crossover into the international mainstream.

Joining Efya on the night is DJ, producer and vocalist extraordinaire Silvastone who will be delivering an exclusive live performance alongside his five piece band. The BBC Radio 1Xtraand MOBO approved virtuoso represents a sound that takes unique influence from Ghana, Sierra Leone and South London and has put together polished and funky productions alongside the likes of D’Banj, Davido and Chaka Demus. Expect sophisticated afrobeats and outernational sounds that feel as much at home in the club as they do in the car, and from an artist that was tipped as “Best African Act” by three different UK awards in 2015.

Rounding off the live acts is one of London’s most hotly tipped collectives, New Age Musik. Consisting of vocalists Kamo and Prince and producers Tobi Notch and Dami Bones, these North London lads by way of Nigeria were recently picked up by Fact Magazine as a key component in the UK’s flourishing scene and have put out some of the most forward-thinking, afro-infused R&B-soul in recent years. Catch them before they blow.

Warming the decks on the night will be two of the UK’s finest Afro-champions in the shape ofDJ Edu and DJ Neptizzle. Edu is one of afrobeats’ original torch-bearers and through his world famous Destination Africa show on BBC Radio 1Xtra, he’s hosted just about every major act you can think of, establishing him as the undisputed #Afroboss.

Through his Ultimate Afrobeats brand and furious mixing style, DJ Neptizzle has carved his name onto the UK and West African club circuit in recent years, and has just this month launched the flagship afrobeats show on Rinse FM. Expect pure dancefloor heat from these two.

Completing the lineup is A’friquency’s very own resident DJ and founder of electronic music magazine Urban Essence, Adam Tiran who’ll be taking us down south with his smooth blend of kwaito, afro-house and gqom.

Join the team as we offer patrons a unique window into the pan-African movement that’s going global. Join us as we build a new frequency. The New Sound of Africa: A’friquency.

Find out more and get your Tickets Here