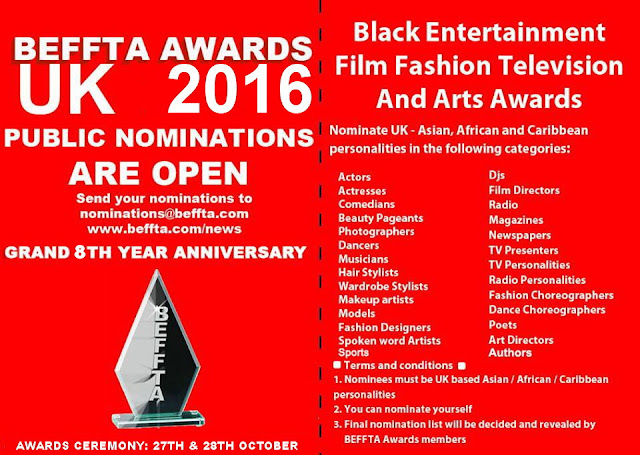 With over 6000 guests in attendance  annually BEFFTA awards, founded by entrepreneur, TV presenter and philanthropist Dr Pauline Long in 2009 is back for the 8th year to celebrate greatness within the African, Caribbean and Asian communities.

The 8th year BEFFTA UK anniversary is expected to be celebrated in a very grand prestigious style bringing together several international and UK stars under one roof with a common goal to celebrate and honour both unknown and known hard working and extremely talented personalities in entertainment, film, fashion, television, arts and sports.

After self-funding the prestigious award ceremony for 7 years, BEFFTA awards has made history by being the only and first award ceremony to be fully funded by community leaders.

BEFFTA founder Dr Pauline Long said, “like every year BEFFTA 2016 is extremely special, in the spirit of giving back to the community everybody including the nominees will receive special prizes as we believe everybody is somebody.”

With today being the last day, the general public can nominate in the following categories by sending names and details of nominees to nominations@beffta.com

For more information on how to get involved as a sponsor, volunteer, red carpet presenter, press please contact the team at info@beffta.com