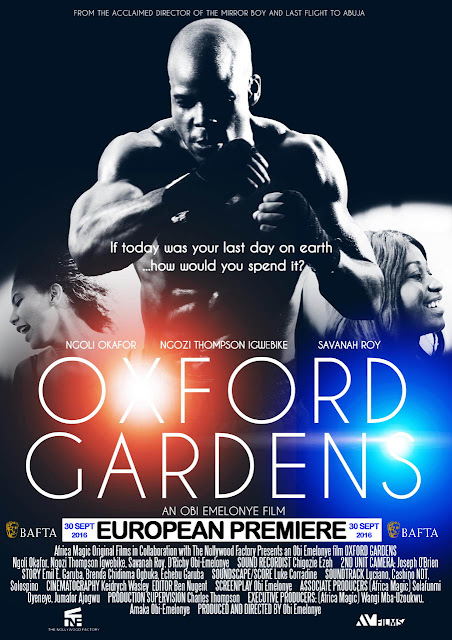 As the much respected movie director, Obi Emelonye prepares to take Nollywood to a whole other level with a new top secret project; UK audiences are preparing to flock to the eagerly anticipated UK European Premiere of his boxing drama Oxford Gardens on Friday 30th Sept 2016.
Known for setting new landmarks in Nollywood cinema, Obi Emelonye has teamed up for a second time with Africa Magic Original Films, the movie studio arm of Africa Magic (Africa’s No.1 television network) and will premiere Oxford Gardens in the UK’s most prestigious private screen, the Princess Anne Theatre set within the British Academy of Film & Television Arts (BAFTA) headquarters. Situated on the world famous Piccadilly roadway, a thrilling glamorous red carpet night produced by Screen Nation Media and hosted by Yetunde Oduwole (Mama Adebanjo of Meet the Adebanjos fame) will mark a new zenith in new Nollywood premieres. Every time the Nollywood audience think they know what’s coming next for uber producer Obi Emelonye he shocks everyone with an exciting new move as Oxford Gardens is the very first Nollywood film to screen at BAFTA.
Starring two of the hottest new stars international Nollywood has to offer, this Africa Magic Original Films production showcases the Screen Nation award winning talents of gorgeous model turned movie starlet Ngozi Thompson Igwebike. 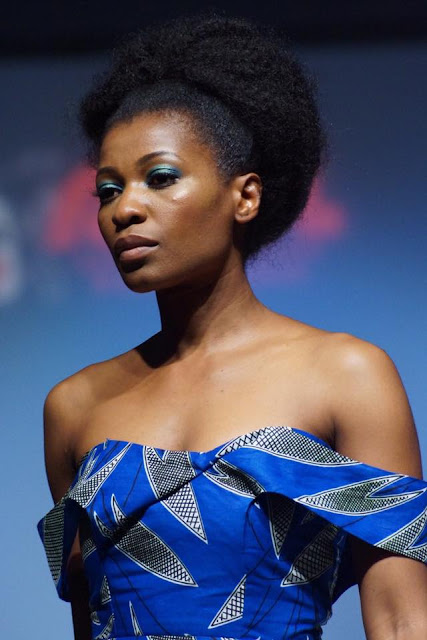 Model & Actress: Ngozi Thompson Igwebike
Not to be outdone in either the acting or beauty stakes, LA based heartthrob Ngoli Okafor, the hugely popular and most downloaded black male model in history brings a gritty realism to his first lead role in this highly rated African international movie. The ex Golden Gloves boxing champion more than holds his own to deliver a knock out performance that helps set, Oxford Gardens apart in the fast moving and ever evolving new Nollywood movie landscape.
Oxford Gardens is an inspiring love story wrapped in boxing gloves. Julius (Ngoli Okafor) is a broken, down-­on-­his-­luck ex-­boxer, living his life on the edge, but in desperate search of redemption. Munachi (Ngozi Thompson Igwebike) is a pretty, bubbly young girl carrying a dark secret. A chance meeting on a park bench in Oxford Gardens one summer afternoon sets in motion an unlikely friendship and an uplifting journey through their respective fears; and through hope, faith and love; to a stoic acceptance of whatever life throws at them.
With a keen eye for mixing gifted character actors with fresh new faces, Obi has set his own daughter D’Richy Obi-Emelonye on the road to future stardom as she makes an unforgettable debut appearance in her father’s film. Ngoli Okafor
The Oxford Gardens premiere will feature the cream of UK Nollywood in red carpet style with celebrities and media personalities in attendance alongside eager movie fans waiting to witness Obi Emelonye’s latest creation. Leading the charge will be Ben Green, Princess Abiye, Iffy Chukwu, Howard Corllet, Sam Akowe, Vivi Kris, award winners Archie Collins Pearce and Nnenna Ani who feature alongside Paris based Savannah Roy and actors Ferguson Jack, Michael Udogba, Ene Oloye, Alloy Ezeji and Frank Ani.
With negotiations pending with BAFTA, it is hoped that all the red carpet action will be caught LIVE as it happens on Google+ Hangout via The Nollywood Factory YouTube channel and across social media.
Speaking on the movie’s unique storyline, Mr. Emelonye said. “Boxing films over the years have been very successful globally and they stir potent emotions in audiences. Wrap that up within a heartfelt love story and it takes a real champion to hold back the tears by the time the final bell rings”
Mr. Emelonye added: “Once in a while, a simple film comes along to shake up African cinema. The Mirror Boy did that in 2011, and I have a feeling that Oxford Gardens may have a similar impact. The movie explores new exciting themes and takes action to a whole new level. I am really excited about this film and I am grateful for the huge support I received from Africa Magic in making it happen.”
Speaking on the collaboration, the Director, M-Net (West Africa), Wangi Mba-Uzoukwu said: “At Africa Magic, our resolve to continuously improve the Nigerian film industry remains a key part of our investment strategy. Through our ongoing partnerships with industry stakeholders such as Obi Emelonye, we can positively impact Nollywood, which provides us with the opportunity to add to the exciting content on our channels.”
Legendary boxer and lead actor Ngoli Okafor said ‘’Oxford Gardens gave me an opportunity to make my mark in the hugely popular Nollywood film industry. It was a great experience making the film and I am excited about this European premiere, happening at such an iconic venue. I look forward to the event’’.
https://www.youtube.com/watch?v=em2IqQmkK-A
Tickets: £30
Visit: www.oxfordgardenspremiere.eventbrite.co.uk
Brought to you by Screennation.