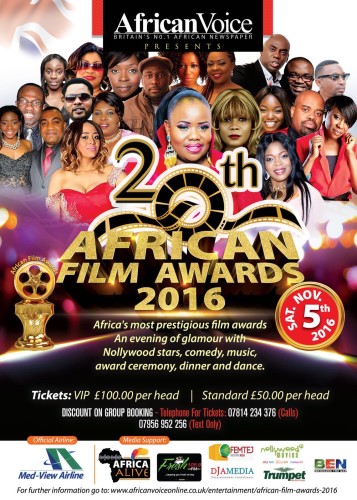 The African Voice Newspaper UK, organisers of the awards said, the special 20th anniversary edition of the African Film Awards looks to promote British Nigerian Film Collaboration. The awards is expected to be a glamourous evening with high net-worth individuals, film investors and experts in the film industry.

Mike Abiola, founder of the African Film Awards said, “The 20th Special Awards Ceremony will be honouring deserving recipients who have contributed immensely to the growth of the film industry. Lovers of the fast growing film industry in Africa, Nollywood will have the opportunity to celebrate with their favourite stars at the glamourous film awards ceremony, evening of comedy, dinner, music and dance.”

African Film Awards otherwise known as Afro Hollywood Awards has honoured over 300 recipients since its inception in 1996. The awards have served the purposes of promoting and advancing the dynamic growth of Africa’s Film and Arts in Europe, especially in the United Kingdom uniting the Africans and Caribbean communities.

Sarah Okereke The Return Of The Don

Malcom A Benson Return of The Don

Return of The Don by Benalex Media Production

Malcom A Benson Return of The Don