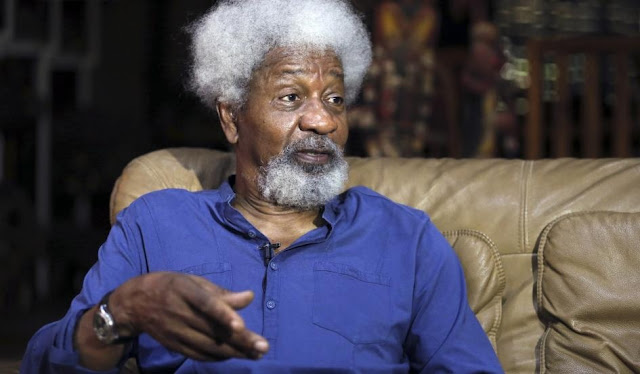 “I don’t have strong enough fingers to tear up a Green Card,”  said Wole Soyinka, age 82. The first African Nobel Prize in Literature winner once fled to the United States from Nigeria. Now the fickle winds of politics are pushing him in the opposite direction.

Soyinka’ s latest flash of activism involves Donald Trump. While spending Thanksgiving with his family in the United States, Soyinka says, he followed through on a pledge he made shortly before the U.S. election: to destroy his U.S. permanent-resident card, or Green Card, if Trump won the presidency. Over the years, he’s left Nigeria for stretches to teach at universities in the United States and around the world. He said he obtained his Green Card during his “political sabbatical” at Emory University in the ’90s, with the help of former U.S. President Jimmy Carter.

In his own words during an interview with Uri Friedman.

“I don’t have strong enough fingers to tear up a Green Card,” he added. “As long as Trump is in charge, if I absolutely have to visit the United States, I prefer to go in the queue for a regular visa with others,” he said. “I’m no longer part of the society, not even as a resident.”

His self-described “Wolexit” from the United States is an act of protest against what he views as Trump’s xenophobic campaign rhetoric regarding specific ethnic, racial, and religious groups, including blacks, Hispanics, and Muslims. It’s a statement by a man who in the past has warned of humanity’s terrible tendency toward “[p]olarizations within various micro-worlds—us versus the inferior them.”

“Trump’s wall is already under construction,” Soyinka recently told The Interviewmagazine in Nigeria. “Walls are built in the mind, and Trump has erected walls, not only across the mental landscape of America, but across the global landscape.”

But Soyinka is not necessarily urging others to follow his example and join the resistance to Trumpism. He appears to be withdrawing from the political dysfunction he denounces instead of trying to resolve it. He has characterized his decision as a “personal” and “private” one, to which “no one else is invited.” (Soyinka vowed to tear up his Green Card in a question-and-answer session with students at Oxford University, not in some showy press conference, and he hasn’t much welcomed the media attention surrounding his move.)

These worries notwithstanding, Soyinka recently told Nigerian journalists that “Trump is not really my business,” and that Trump should be allowed to go about his work after winning the election. “We [should] just watch [to see] whether our worst fears will be effected,” he advised. “There are born-again humans all over the place, in all religions. Why not in politics?”

In the meantime, after decades of speaking out against dictators and kleptocrats, Soyinka is retreating to Abeokuta, the Nigerian city where he grew up. “For me, my little hole in Abeokuta is not just home,” he told me. “It’s a one-man nation. It’s the obvious place to return to.”