Home Events The lives of thousands of believers are expected to be uplifted at... 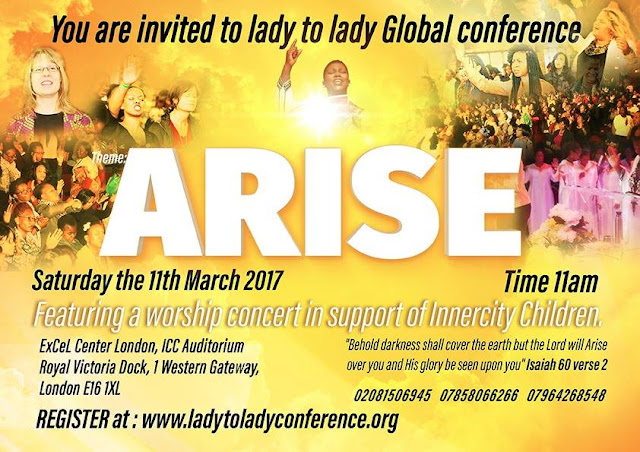 The event has attracted so many women in the previous seven years that this year it is being held at the Excel Centre, London, to accommodate them all. You can register for free tickets until January 31st.

Tickets are likely to be snapped up quickly as lives have been changed and miracles have happened, according to the many testimonies that the organisers have received.

“We really want to reach out to ladies for a sweet fellowship. And to those women who are hurting, broken, depressed and have given up hope, we want to show them that hope is there and they can live again,” said Deaconess Sandra of BLW, Norwood, who is hosting the event.

“Our Lady to Lady meetings are likened to the fellowship of Mary and Elizabeth in the book of John. Both ladies were carrying extraordinary miracle babies. It was beyond human comprehension. At the sound of Mary’s greeting the baby in Elizabeth’s womb leaped. Both ladies began to prophesy and the atmosphere was electrifying. You have to be there to experience it yourself.”

Sandra believes there was a baby boom after the 2015 Conference as so many ladies returned in 2016 claiming they they had conceived!

Ijeoma, who had been told it would be impossible for her to conceive naturally due to having Polycystic Ovarian Syndrom (PCOS), testifies that a miracle happened after she attended the 2015 Lady to Lady Conference.

She said: “The woman of God declared that God was going to do something amazing, that women would receive strength to carry their babies to full term. I received those words declaring IT IS DONE!….

“Today, we have a beautiful baby girl called Praise.”

Sandra will be ministering in particular to women with the following conditions:

If this is you or you know anyone with any of these categories, get them to register for tickets for the Lady to Lady “Arise” Conference now before the free early bird tickets end on January 31st.

Find out more about this event and book your free tickets here: Event website.