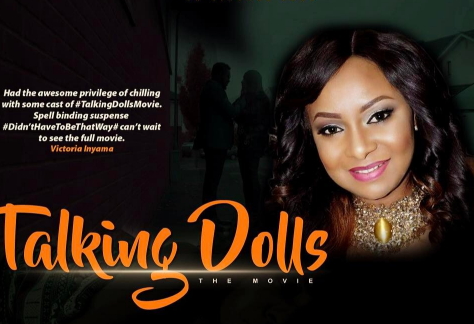 The trailer for ‘Talking Dolls’ a movie directed by; Sukie Oduwole and Produced by Marc Adebesin is out. Talking Dolls is a controversial romantic love story which follows the lives of two colourful and opposite characters who find love with each other and lose more than they bargain for.

Linda (Belinda Effah) a young girl had suffered serial abuse in the hands of the man she trusts most – her father.

She runs away from home to live with Ade (Kunle Oladeji), a relative of her mother in, (London city) but her life is not much better here with her cousin and two of his flatmates. Linda soon leaves Ade’s home and moves in with a girlfriend Lace (Marie Gomez), a pragmatic and charismatic Call-girl who takes Linda under her wing as a fellow African lost in London. Despite subtle pressures from Lace, Linda refuses to imbibe her lifestyle, but instead finds a job as a bookkeeper in a hair salon. For the first time in her life, Linda is in control of her destiny, when she meets and falls for George (Daniel K Daniel).

This sociological trauma is almost too much for Linda to bare, especially the discovery that she was only a mere sexual distraction for George for the past 4 years. In the resulting fiasco, the unexpected happens. Talking dolls is an unpredictable kaleidoscope of drama and suspense carefully built up to a climatic epic finale that critics and film audiences will not see coming.

“Talking Dolls is an intriguing story that also addresses societal issues, sex abuse and their shortcomings. It was shot in the heart of London, Kent and Essex and is due to be released in U.K, Ghanaian and Nigerian cinemas in the second quarter of 2017”, said the assistant producer of Talking Dolls, Mr. Olasunkanmi Ojo.