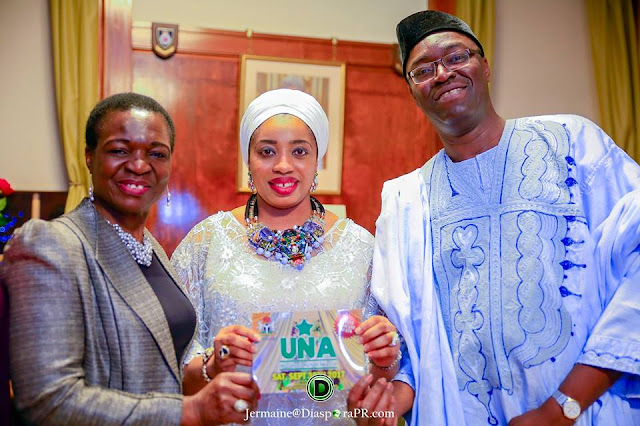 OONI of Ife His Imperial Majesty Oba Babatunde Adeyeye Ogunwusi has thrown his weight behind the Uncelebrated Nigerians Awards (UNA) UK saying it is an imaginative concept that honours hardworking Nigerians in the diaspora.

Oba Ogunwusi who was in the UK for a two week visit, during which he attended Commonwealth events, met with members of the British royal family and held several town hall meetings with the Nigerian diaspora, praised the resilience of the community. He urged the diaspora community to continue excelling and to find ways of transferring its skills, experience and capital back to Nigeria.

During a meeting at the House of Commons, Oba Ogunwusi said: “Many of you Nigerians in the disapora have excelled in your various fields of endeavour. Nigeria needs both your expertise and the capital you can invest in the country.”

At a further meeting with the Nigerian diaspora in Woolwich, where he was hosted by the mayor of Greenwich Councillor Olu Babatolu, the monarch said they had proven that Africans can excel anywhere. Posing for photographs with the hundreds of Nigerians who turned up to receive him, the Ooni urged diasporans to always remember that their services are needed back home.

Oba Ogunwusi added: “At the moment with the value of the naira being low, your foreign exchange can go very far, so please remember that a small amount of investment can go very far in Nigeria. It maybe that you have to forgo one aso ebi to invest in a small project in Nigeria that can go a long way.” 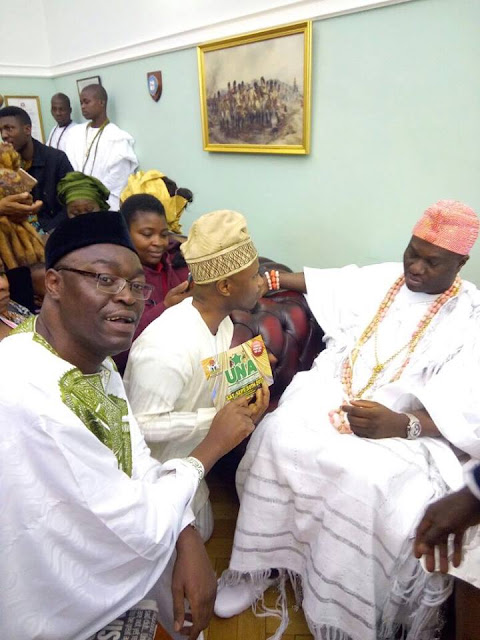 Diasporan cultural icon Ayan De First, who was one of the main organisers of the visit, used the opportunity to explain the details of UNA to the monarch, pointing out that the event was organised to expose more hidden gems. Ayan de First, who is the chair of UNA’s sponsorship sub-committee, explained to Oba Ogunwusi that UNA will hand out 57 awards this year and asked if the monarch would be kind enough to attend.

Responding, Oba Ogunwusi said he is due to return to the UK later this year and will check his diary to see if he can time his visit to coincide with UNA 2017. Holding at the Mayfair Banqueting Suite in Chadwell Heath, UNA 2017 will take place on September 30,.starting from 8pm and lasting until 4am the following morning.

Ayan de First added: “Our 2016 version involved the handing out of 56 awards to unrecognised Nigerians in the UK and it was highly popular with the community.

He pointed out that a formal invitation letter has already been handed to the Ooni to attend this year’s event. Last year’s event was attended by dignitaries that included the mayor of Redbridge Councillor Gurdial Bhamra; Hon Abike Dabiri-Erewa, the senior special assistant to President Muhammadu Buhari on diaspora affairs and Mrs Olufolake Abdulrasaq, the head of welfare, consular and education at the Nigerian high commission in London.

Malcolm Benson, the chairman of UNA’s publicity sub-committee, added that among the dignitaries invited this year include the wife of vice president Mrs Dolapo Osinbajo. He pointed out that this year’s event will be bigger and better than that of last year and will go on for much longer lasting until 4am.

According to Mr Benson, all the proceeds from the event will go to good causes, similar to the projects the Oni is trying to promote. During his two week visit to the UK, the Ooni sought to raise funds for several charitable events he is organising to empower the youth within his domain.