Home Events The Greatest Love of All: The Whitney Houston Show at Artscape Opera...

Back by popular demand! The Greatest Love Of All: The Whitney Houston Show returns to Cape Town to once again honour and celebrate the world’s most loved pop diva.
The show is set to return to Artscape Opera House this June in The Mother City for a four-week run of shows at the Artscape Theatre Centre.
Starring the breathtaking voice of Cape Town’s own Belinda Davids live on stage with a seven-piece live band, dancers and theatrical effects, The Greatest Love Of All: The Whitney Houston Show is both a brilliant tribute to one of music’s most loved-icons and a spectacular concert experience in its own right.
Launching just over three years ago and leaving hype in its wake ever since, the production has already achieved great successes, opening with a sold-out six week season in Johannesburg 2013 and going on to perform to over 80,000 people so far across the UK, Europe, Australia, New Zealand, South Africa, Dubai and North America.
And Capetonians should be proud – the star generating all the excitement is none other than local songstress Belinda Davids, who almost didn’t even make it to the original auditions for the show but now entertains thousands of Whitney fans each year with an exhausting tour schedule of up to five shows a week for more than six months a year! The show returns to Cape Town after enjoying a successful six-week European tour last month, which saw audiences in Iceland, Germany and Austria being dazzled by Davids’ mesmerizing talents on stage.

Prompted into auditioning last-minute by a friend, the Port Elizabeth-born Davids, who now resides in Cape Town, was one of almost 15,000 singers who tried-out for the demanding role, but Director John Van Grinsven knew immediately that she was the star he was looking for:

“Belinda’s voice is astounding on its own, but when you hear her sing Whitney songs in full voice, and with such personal affection, it’s an ethereal experience,” say Van Grinsven.

Audiences and critics around the world are in avid agreement, with reviewers describing Davids’ voice as “staggering”, “mind-blowingly spot on” and “remarkably like Whitney Houston.”

Now the show has changed Davids’ life as she spends months at a time travelling the world on tour and performing at international events such as the the Miss Germany Finals and the annual Ball Des Weines, gala where she entertained the German Prime Minister in 2016.

Bigger opportunities continue to come Davids’ way – recently she has accepted an invitation to perform a select number of show-stopping performances in the UK in 2018 accompanied by the National Philharmonic Orchestra.

The upcoming season at Artscape Opera House will be the show’s second visit to Cape Town after the first took place in 2015 and was a virtual sell-out. 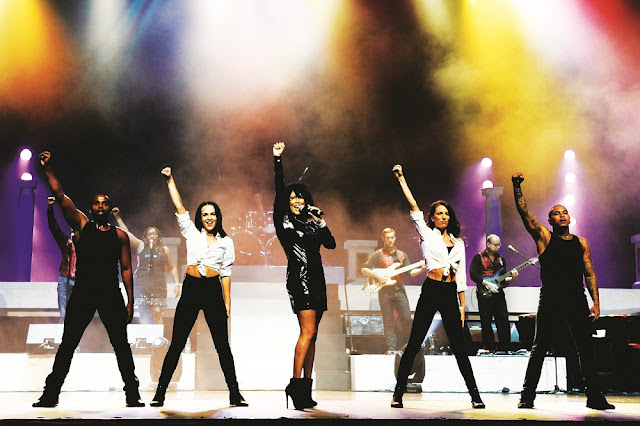 Since then The Greatest Love Of All: The Whitney Houston Show has seen vast updates to production and new costuming so the experience will be fresh for patrons who’ve seen the show before.

Audiences can be assured that all of Whitney’s greatest ballads and Pop hits will still be on the set-list, including I Will Always Love You, I’m Every Woman, One Moment in Time, Run to You, Saving All My Love, Queen of the Night, I Wanna Dance With Somebody and many more.

“I want people to come and remember Whitney when she was at the top of her game and when she was fabulous”, says Davids, who will be accompanied on stage by a full live band and dancers including another local – professional dancer and acrobat Nathan Adriaanse.
Tickets for this spectacular show can also be purchased via Computicket at eitherwww.computicket.com or via Checkers and Shoprite retail stores, countrywide, and range between R190 and R390 each.
MORE ABOUT BELINDA DAVIDS

For accomplished South African songstress Belinda Davids, starring in The Greatest Love of All: The Whitney Houston Show is the culmination of a life-long connection with the superstar to whom she pays homage.

In 2013 Davids beat almost 15,000 other hopefuls to take on the dream role and it was her own eternal love of Houston that prepared her for the show. Exposed mainly to R&B and gospel as a child, Davids was innately drawn to Houston’s musical style. Singing professionally from her early teens, Houston songs became a fixture in Davids’ live shows. “I think I’ve sung at least one Houston track in almost every live show I’ve ever performed,” says Davids.

Though she eventually carved out a successful career as a chart-topping solo artist and a session vocalist for such artists as The Temptations, Keri Hilson, Keyshia Cole, Monica and Johnny Gill, in her earlier days Davids encountered resistance from many industry professionals who were unsure how to work with her because she looked and sounded so exactly alike Houston.
The ultimate realization of Davids’ affinity with Houston occurred during a show in Hong Kong. Following a recital of ‘I Will Always Love You’, the audience was so astounded by her performance that they demanded she sing acapella to prove she wasn’t lip-syncing to a Houston track.