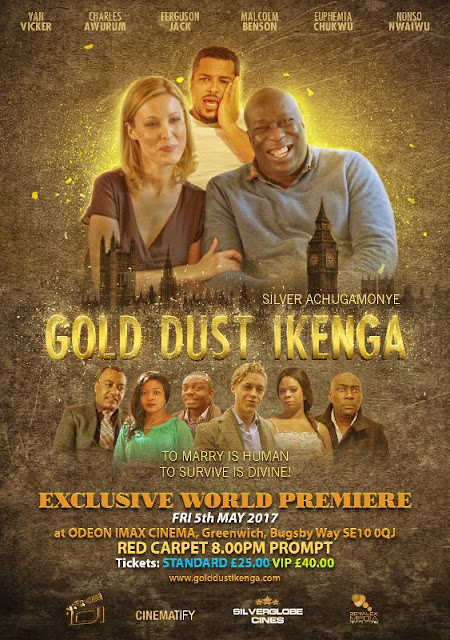 ‘Gold Dust Ikenga’  a movie produced by Malcolm A Benson and Silver Achugamonye,  in association with Benalex Media Production would hold it’s World Premiere, Friday, May 5th, 2017 at Odeon IMAX Cinema London.
Written and directed by Silver Achugamonye (Marriage in the Dark 2014, The Outcast 2016), the movie tells the story of a young Christian man, Ikenga Okeke and his quest for a heaven-sent wife. Completely reliant on his self-defined prophetic signs to find her, he might just find that there is indeed no gold in the glitter! Gold Dust Ikenga is another Benalex Media and Silverglobe Cines production set in London and sub-urban areas of the South East.
The Movie is set to be released in cinemas across Nigeria and Ghana following its opening in the United Kingdom. There will be further releases in other African countries following the West African release. The Director/Writer/Producer Silver Achugamonye has done successful movies such as Marriage in the Dark 2014 which won the BEFFTA Award and the movie Outcast in 2016.
The Producer Malcolm A Benson is an award-winning Director/Actor/Producer who has starred in many films and has also directed and produced films such as Return of The Don, Ortega and His Enemies, Forget the Pact, Phantom of Fury. Lads in The City among others.
His recent film Return of The Don, has won multiple Film Festival Awards including the Hollywood International Moving Pictures Film Festival Award of Recognition, Canada International Film Festival Award of Excellence, Depth of Field International Film Festival Award of Exceptional Merit, Accolade International Film Festival Award, Los Angeles NAFCA Awards, CA Awards, BEFFTA Awards, Cameron Film Awards, African Film Awards etc.