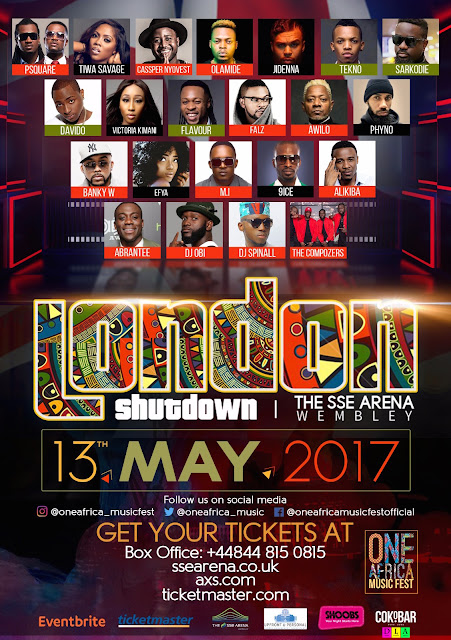 A show not to be missed, mostly if you’re a fan of Afrobeat music. One Africa Music Fest takes place tomorrow, Saturday, May 13th with the biggest line-up of African stars to perform together one stage at SSE Arena Wembley. Stars who are already in London includes; Host Banky W, Jidenna, PSquare, Victoria Kimani, Falzthebahdguy, Awilo Longomba to name a few.

One Africa Music Fest, the world’s biggest Afrobeats festival, makes its debut in the UK on the back of two sold out shows at New York’s Barclays Centre (19,000 capacity) and Houston’s Toyota Center (18,000 capacity) last year, which saw huge performances by Wizkid, Dbanj, Jidenna, Flavour and Seun Kuti,and was attended by US celebrities Swizz Beatz, DJ Ebro, Lil Mama, Angela Simmons and more. The event was also streamed live on Tidal and supported by Hot 97 radio, VIBE Magazine and Okayafrica.

The London extravaganza on 13th May, hosted by Nigerian Singer/Actor Banky Wand Capital Xtras Abrantee Boateng as the official UK DJ is poised to be the Biggest African Festival and Major platform showcasing African music and culture to mainstream and diaspora audiences across the world.