Ghana’s First Lady, Rebecca Akufo-Addo has offered to repay all the wages she has received since the president took office in 2017.

The first lady also said that she would not accept a salary that was recently approved by the country’s parliament. She added that she did not ask to be paid and had only been given that which existed and attached to her status, albeit informally.

Her decision came following a public loud cry over salaries.

Last week, Ghanaians bitterly complained at the decision by MPs to approve salaries for the wives of the president and vice-president for the supportive role they play.

They were to receive about $3,500 a month, the same amount as cabinet ministers following a 2019 recommendation by a parliamentary committee.

Ghanaians queried the capacity in which such an allocation would be made to the said spouses.

The First Lady then responded on Monday, July 12, describing some of the reactions from Ghanaians as unpleasant and want to portray her as a self-centred woman who is insensitive to the affairs of Ghanaians.

According to a statement signed by the Director of Communications at the Office of the First Lady, Mrs Akufo-Addo stated that her decision to refuse the offer is a personal one “without prejudice to the rights of others and does not undermine the propriety of the process undertaken by Parliament.”

The First Lady’s statement reads in part: “The public discussion has been laced with some extremely negative opinions, in some cases, which she finds unpleasant, want to portray her as a venal, self-serving and self-centred woman, who does not care about the affairs of the ordinary Ghanaian.

“In view of this, the First Lady, after seeking the attention of the President of the Republic, has decided to refund all monies paid to her as wages from the date of the President’s assumption of office, i.e., from January 2017 to date, amounting to GHC 899,097.84.”

The statement continued: “The First Lady will continue to support the President, as she has always done, in the driving the affairs entrusted to him by the good people of Ghana.”

See the statement below. 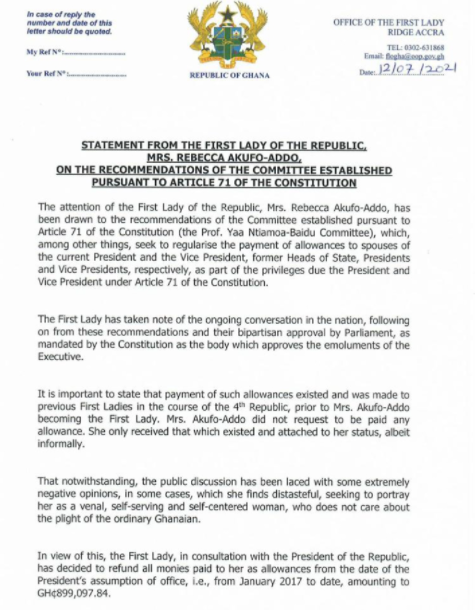 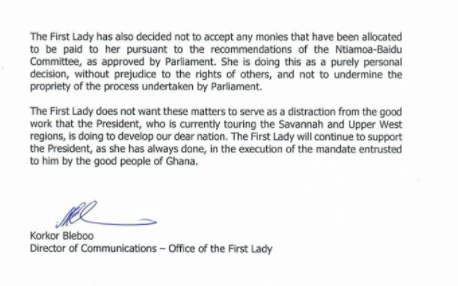