Home News The Reported Arrest Of Sunday Igboho In Cotonou Is Unfortunate – Reno... Reno Omokri has expressed with dismay, the arrest of Yoruba nation activist, Sunday Igboho, referring to it as “unfortunate”. Igboho who was red-flagged by the DSS three weeks ago has been arrested in Cotonou and would be returned to Nigeria today Tuesday, July 20.

Speaking with Sahara Reporters, a source privy to the incident, said

“He was supposed to travel to Germany through Cotonou this night. He wanted to leave Africa through Cotonou. He was arrested by security operatives in Cotonou.

“They are planning to bring him back to Nigeria.”

The Department of State Services had declared Igboho wanted after its operatives carried out a bloody midnight raid on his residence in the Soka area of Ibadan, Oyo State.

DSS Public Relations Officer, Peter Afunnaya, had advised Igboho to turn himself into the nearest security.

“Those cheering and eulogizing him may appeal to or advice him to do the needful,” Afunnaya said. “He should surrender himself to the appropriate authorities. He or anyone can never be above the law.”

Nigerians woke up this morning to the breaking news and many are not happy.

In a post shared on his Instagram page, Reno Omokiri has reacted and said Igboho was a freedom fighter who was defending his people and not a criminal. He urged Nigerians to gather resources for Igboho legal counsel.

”The reported arrest of Sunday Igboho in Cotonou is unfortunate. He is a hero freedom fighter who defended us. We must now repay his good turn and also defend him and gather resources for his legal defence.

Igboho deserves the same commitment from us, that Buhari has shown and continues to show to killer herdsmen and bandits. Buhari has refused to categorise his kinsmen, who shot down a multimillion dollar Nigerian Airforce jet yesterday, as terrorists (they lied that they jet crashed, but the pilot survived and blew open their lies).

Yet, he has criminalised one of the few Nigerians brave enough to stand up to killer herdsmen. And that is why I stand with Igboho. Not for secession. But for defending his people.” 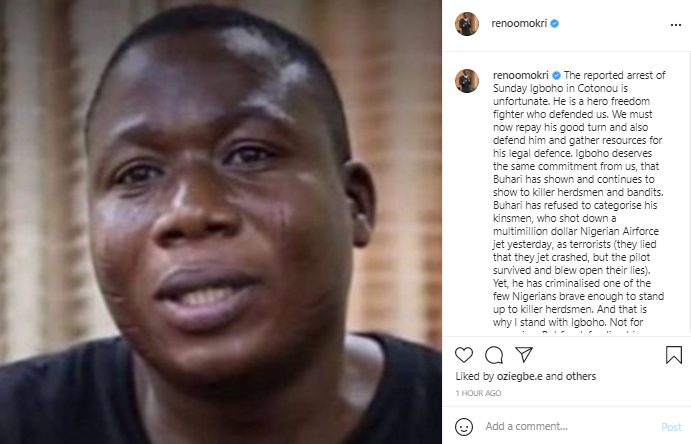