Femi Fani Kayode Was Not Involved In Precious Chikwendu’s Lock Up, She Should Come & See Her Children As A Real Mother – FFK’s First Wife, Regina Defends Him Regina, wife of former Minister of Aviation Femi Fani-Kayode has defended him following allegation of him instigating the arrest of estranged mother of his children, Precious Chikwendu.

Human rights activist, Harrison Gwamnishu had claimed that Precious was detained after honouring an invitation by the Force CID, Area 10 in Abuja.

Regina in a Facebook post she shared stated that her husband of 27 years is not involved in the arrest and detention. She alleged that Precious called a Senator and rained abuses on her for being a friend to FFK, then came on social media to lie about her life being attacked by the Senator.

She also claimed that Precious has never been denied access to the children and can vist them at any time.

“For all those rightly distressed by the issues of Precious, please get your facts right. FFK was not involved in her lock up.

She called a Senator and rained abuses on her for being a friend to FFK, then come on social media to lie about her life being attacked by the Senator.

The Senator had the case investigated to ensure that she’s not wrongfully implicated in the future and her character defamed by the lies.

Precious has never been denied access to the children. She can visit them at any time. You can ask her lawyer.

She walked out of the house over the issue at the hotel because she wanted to continue with her affairs.

She brutalized the children and has never been a mother to any of them since birth due to postpartum issues. Their peadatrucian can confirm the facts.

That’s the reason why the children are not staying with her .

She has phychlogical issues due to childhood trauma..

She tried to stab her children and FFK and actually did stab one of her relatives in the house.

It took her doctors and several police officers 6 hrs to restrain her.

She has never been physically abused by FFK. She had numerous relatives living in the house including her three brothers .

FFK has never threatened her life or endangered her in any way, even on the day he caught her naked in the hotel room he never beat her so what else could she possibly do to provoke him to hurt her ?

These are facts of the case and l dare anyone to make their own investigation if they doubt the truth. All evidence will be available in court.” 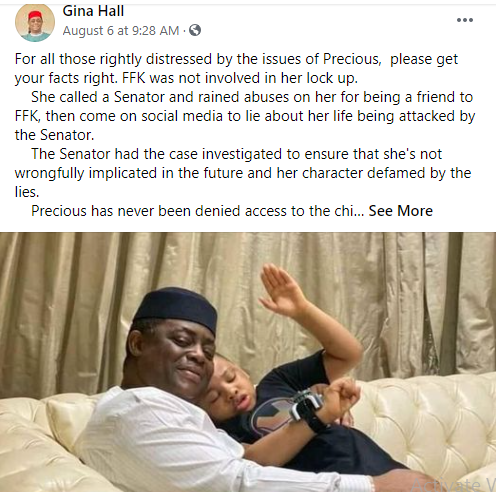 Regina in another post, asked Precious “to come and see her children as a real mother and stop deceiving the public, as nobody is keeping her children away from her.”

“To the friends and advisors, please tell Precious to come and see her children as a real mother and stop deceiving the public, nobody is keeping her children away from her.

Even animals will enter any pit if their child is there, but you have comfortably kept away for a year.

Making excuses that you can’t stand your bad memories of the house and that’s why you can’t visit your babies.

A responsible mother will always prioritize the sight of her babies above any personal need.

You better get professional help for your lack of empathy for your babies and learn to be a little selfless as a mum”.