Home News U.S Withdrawal From Afghanistan & The Recent Effect: Here Is What Femi... Former Aviation Minister, Femi Fani-Kayode and former Presidential spokesman, Reno Omokri have reacted to the horrific news about how the Taliban took over the government in Afghanistan.

While Reno observed that the first people evacuated from the country are the President and his cronies, not the poor. The famous author warned Nigerians who support President Muhammadu Buhari-led administration because of tribe and religion to rethink.

FFK on the other hand asked Nigerians who supported President Joe Biden during the US presidential elections to start praying that Boko Haram and ISWAP members don’t come knocking on the gates of Abuja or take over Nigeria, just as the Taliban have taken over the reins of affair in Afghanistan.

He said this while sharing his thoughts on the recent happenings in Afghanistan.

In a post shared on his Instagram page, FFK opined that the US President should have opted for ”tactical withdrawal” of US forces in Afghanistan instead of the “capitulation he embarked upon.” He claimed that if former U.S. President, Donald Trump was still in power, such a thing would never have happened.

”There is a difference between a tactical withdrawal and capitulation. The way in which the Americans left Afghanistan was shameful. Joe Biden botched the whole thing up and the United States of America left in humiliation and defeat. They couldn’t even secure their own embassy.

This is the greatest military humiliation and defeat that the Americans have suffered since Viet Nam. And yes I will say it: under Donald J. Trump this could NEVER have happened. He would have withdrawn but he would never have capitulated.

He would have withdrawn but it would have been with dignity and self-respect. And neither would he have abandoned all those that helped the Americans when they were there. If you are an American and you voted for Joe Biden clap for yourself.

If you are a Nigerian and you supported Joe Biden start praying hard that Boko Haram and ISWAP do not ever knock on the gates of Abuja or take Nigeria because sleepy Joe will not raise a finger to help us and neither would he give a damn.

Welcome to the new WOKE world!” 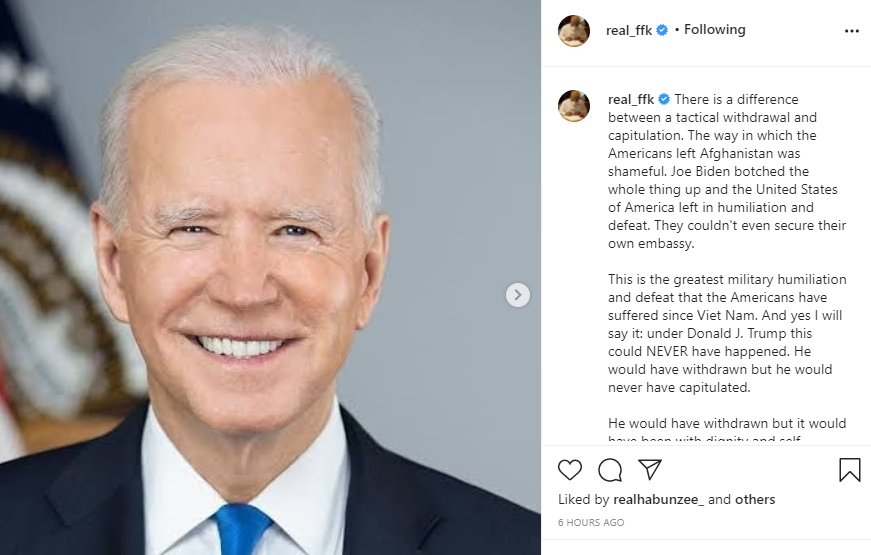 Reno Omokiri however said that Buhari and others would be evacuated to London if they destroy Nigeria and leave the poor masses to suffer.

“Already, Tinubu is in London, while Buhari just returned from the UK. Their children were all schooled abroad. Their wives shop abroad. They only suck Nigeria dry in the guise of leading her. Look at how they killed unarmed peaceful youths to protect Tinubu’s economic interests during the #LekkiMassacre of #EndSARS protesters.”

The former presidential aide opined that there is no discernible difference between the ideology of Taliban and Boko Haram, yet the Nigerian government continue to spend billions rehabilitating them.

Reno also noted that what is happening in Nigeria today first happened in Afghanistan. He said the rehabilitation of the so-called repentant Taliban by the US and Afghan government allowed them to act first as spies, then as enemies within, which was a chief causative factor in the rapid victory of the Taliban. Repentant Bokoharam; It’s a Scam: Our Leaders Send Us To Die In Battle – Boko Haram Ex-commander Opens Up!

Unforgettable Horrific Scenes, That Will Continue To Be Part Of History As Far As The Earth Exists As U.S Marks 20th Anniversary Of 9/11...