Jamie Barnwell-Edinboro spent two years at Coventry City in the Nineties while also playing for Swansea, Wigan and Cambridge United.

The 45-year-old, who now lives in Hull, was reported missing on Monday, August 23, after he left home to go to the gym.

His wife Annaliese shared an emotional public appeal on Facebook, writing: “Really didn’t want to have to do this but if anyone sees Jamie can you please let me know ASAP.

“He left home at lunchtime saying he was going to the gym – but he was acting really strange and out of character – he’s emptied his car boot – (which I assumed was for the cases for holiday at weekend) and he’s gone.

“I finished work at 5pm – was worried he wasn’t home yet – tried calling but his phone is switched off.

“Gone upstairs and found a letter on my bed – saying he’s sorry but he can’t take this life anymore.

“He’d seen something online one of his sons had written about him today and it’s broken him. He’s absolutely heartbroken.

“Looking at the letter he doesn’t have any intention of coming home or been found.

“He has no money, no clothes, nothing, and I’m really concerned for his welfare, having struggled with mental health previously. 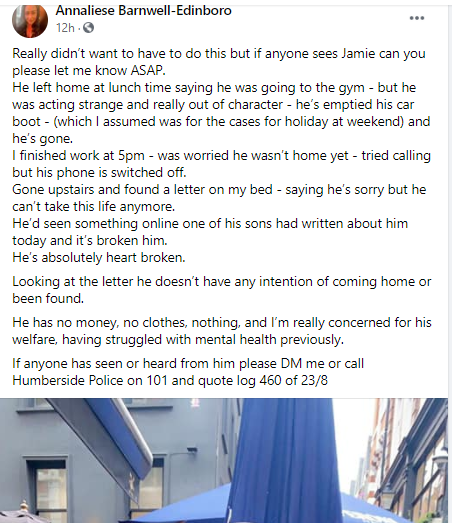 Barnwell-Edinboro had previously gone missing in 2014 though had since began his UEFA A Licence coaching course and helped set up Blokes United.

According to their website and social media pages, it is a confidential, non-judgemental, social inclusion group that offers support from experience and, most importantly, “football therapy”.