HomeReality TVBBNaija Cross In Trouble After Revealling That He Had A Chat with...
Reality TVRomance Big Brother Naija star, Angel has shared a tweet tackling those who take “money from Nigerian politicians during this period to sway the public”, shortly after her co-reality star Cross revealed that he had a chat with Peoples Democratic Party presidential candidate, Atiku Abubakar.

BBNaija Angel was born in the year 2000 to London-based parents. Angel is originally from Akwa Ibom state. She lived in Nigeria while her parents lived in London.

BBNaija Angel studied at Marywood Girls College, Lagos, then proceeded to the University of Lagos (Unilag), where she was a student for about two weeks. However, she attended no lectures during that period.

BBNaija Angel studied in a secluded high school and underwent pressure from parents and school. According to her, to get an “A” in Marywood Girls’ College, Lagos, you need a score of 96.

BBNaija Angel later enrolled in a British foundation college to study mass communication but dropped out.

Cross who described Atiku as his “Dad”, asked Nigerians who they think would be his running mate in the 2023 presidential election.

Had a quick chat with my dad @atiku his so funny guys. Who do you think his Vp will be  just thinking  out loud Shortly after the tweet was shared, Angel stated that those “taking money from Nigerian politicians during this period to sway the public” should be very ashamed of themselves. She noted that this is a critical moment as the wrong move will destroy Nigeria.

If you’re taking money from Nigerian politicians during this period to sway the public, be very ashamed of yourself. This is a very critical time for Nigeria, one wrong move and we’re finished. Choose your morals over greed.

The 21-year-old was in a relationship before going into the house. BBNaija Angel shared the sad story of how she lost her first boyfriend in 2019.

BBNaija Angel is “single and ready to mingle,” in her own words, concerning her relationship status. BBNaija Angel made it known that she is not ready to get into a serious relationship until she recovers from the death of her boyfriend.

Angel also wondered why some people will choose to collect money to “persuade the masses to put these people in power”, when they know young and old people were killed during the #EndSARS movement.

I think it’s hilarious that you people are aware that people; young and old got k*lled because of the endsars movement and still you choose to collect money to persuade the masses to put these people in power. I know I said we should abolish shame but please still have small.

Even if you fit japa, what about your friends and family that can’t? 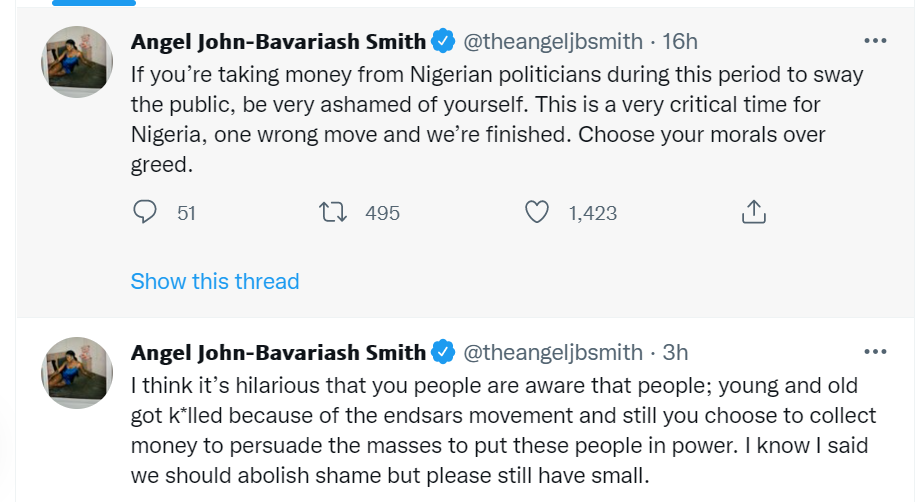