HomeDeathNigeria Is No Longer A Safe Country To Just Live - BBNAIJA...
DeathDisasterFeatured BBNaija star, Erica Nlewedim has expressed concerns over the state of security in the country.

Erica started her career with a passion for modelling while she ran her company Beluxia Hair. Her first modelling endorsement was with Natures Gentle Touch a cosmetic brand that deals with hair products, before proceeding to contest for the Most Beautiful Girl in Nigeria (MGBN) pageant representing Kogi state, she also earned the MBGN Miss Photogenic award.

In 2015 after graduating from Met Film School, she ventured into her career as an actress she played the leading role in Secrets and Scandals. She has played major roles in movie series such as Royal Castle and Being Farouka. She played a major in a Nollywood romantic comedy movie Hire a Woman (film) where her character name was Nifemi. The movie featured notable Nigerian actors such as Alexx Ekubo, Nancy Isime, and Uzor Arukwe. She also played a leading role in Made in Heaven series which featured top Nollywood stars such as Richard Mofe-Damijo, Toyin Abraham and Ayo Makun.

In 2020 Erica participated in the 5th edition (Lockdown Edition) of the Big Brother Naija reality TV show. She was disqualified on September 6th, 2020. After her disqualification, fundraising of a hundred thousand U.S dollars ($100K) was set for her through GoFundMe where her fans were able to donate fourteen thousand U.S dollars. Erica before leaving the house apologist to everybody she has offended, that it was out of emotional stress she is pass through, that made her react in some ways.

Posting via her Twitter handle, Erica was strong of the opinion that she doesn’t think it makes any sense to invest in businesses or buy properties in Nigeria.

”Nigeria is no longer a safe country to just live. It wasn’t an explosion, the building wasn’t destroyed but people were dead on the floor. God please help us.

I don’t even think it makes sense to buy property or invest in businesses in nigeria anymore cos safety is no longer guaranteed” she tweeted. 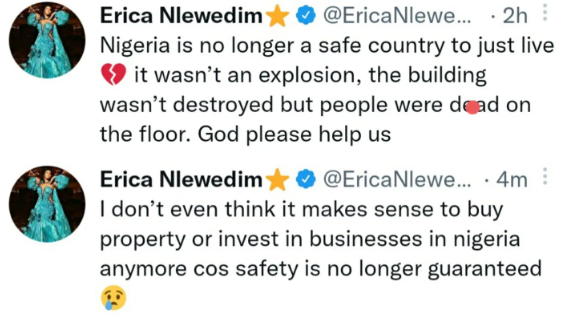 Share
Facebook
Twitter
Pinterest
WhatsApp
Previous article
Why Do Security Forces Always Get “Intelligent Reports” About Protests But Never About Killers Murdering And Burning People In Broad Day Light? – Actor Frank Donga
Next article
“I Don’t Think There Is Anything To Be Ashamed Of In Enhancing Your Body – Mercy Eke Explains Why She Went Under The Knife